I know I'm hopelessly behind on this blog. Bear with me.

So two weekends ago (July 4-6) a small group of interns decided it'd be a good idea to go visit all those animals India is so famous for. We decided to take a safari into Bandipur National Park, one of India's largest tiger reserves. Since it was close to the major city of Mysore, we bookended our safari journey with some sightseeing there.

My first experience on an Indian train wasn't bad (although it WAS an A/C chair car rather than a famed sleeper car, and I WAS traveling with a majority of South Asians, most of whom knew their way around a train station). The three-hour train ride past with a minimum of delays and we arrived in Mysore on Friday night. After dinner at a nice hotel (that's where the reputable restaurants are in India, it seems), we drove to the famed Mysore DC.

The Infosys campus in Mysore is enormous, since it's where the training of all new employees occurs. Each Infosys employee spends about 5 months in Mysore, staying in the vast ECC (hostel/guesthouse) there. The campus contains state-of-the-art classroom facilities (and is building more) and several health clubs, food courts, spacious green lawns, a 4-screen multiplex, and even a bowling alley. It's pretty ridiculous. It kind of makes me want to work full time for Infosys.

Anyway, we spent the night at the Mysore ECC and spent the next morning relaxing over tea and a delicious breakfast at the floating restaurant in the center of campus before the 2-hour drive into the hills to Bandipur (stopping along the way for coconut milk, out of a real coconut whose top was hacked off with a machete before our eyes), where we checked into 4 quaint two-person cottages, complete with hammocks outside. The package we had purchased included several meals, so we took our lunch at the Ghol Ghar (= round circular dining area). The food was humble but good, and we ate our fill before retiring for napping, reading, and chilling in our rooms or hammocks. Tea was served promptly at 4pm, and at 4:30 we all crowded into a single open-topped Jeep for a three-hour safari.

Riding in the jeep was thrilling from the start, as Indian driving habits apparently don't change in the jungle. But the real excitement began once we got into the park. Over the course of three hours, we saw elephants (herds of them! with babies!), deer, peacocks, gaur (indian bull), kingfisher, woodpecker, monkeys, and even heard a leopard growling in the bushes. Although we waited for quite some time, he wouldn't come out (and sadly, we saw no big predators. Tough luck). On the whole, it was quite a cool experience.

After we returned to the camp, we snacked and were shown a truly amazing (cough) wildlife film called "the leopard that changed its spots," about a leopard named Henrietta (!) raised by some guy, and detailing her subsequent return to the wild (and birth of cubs, of which there was plenty of disgustingly cute footage). Whatever. The best part of it was definitely the music, which was an 80s midi soundtrack that sounded like a middle school oboe choir. Dinner at the Ghol Ghar, and then a campfire.

The next day we woke before dawn for tea (or at least, the girls did. The boys wouldn't get up till we pounded on the doors several times) and a trek into the forest. By the way, it's not called "hiking" here, but rather "trekking". good to know. The guide showed us some birds' nests and what were supposed to be leopard prints, but they apparently do that for everyone so I don't think they were real leopard prints. We scaled one of the surrounding mountains (okay, hills) for a spectacular view of the surrounding area, then returned to the campsite to check out and leave our relaxing weekend paradise.

Before we checked out, we did manage to fit in an elephant ride. The elephant's name was Jaiprakash, and I almost didn't ride him but they assured me he was well treated. I really hate stuff like this normally, and probably wouldn't have done it but for the thought of what would happen if I return from India and my friends and family find out that I did not ride an elephant. So I did, although I spent the whole time thinking how boring it must be to go around in circles and get yelled at and kicked in the head by a skinny Indian dude all day.

We took the cabs back to Mysore and lunched on campus, but many found the food unsatisfactory so we pledged to find food somewhere in the city. Our first (and, as it turned out, only) tourist site was the famed Mysore palace. My opinion: gaudy and overrated. However, the exciting part was being able to practice my Hindi. To retrieve our cameras from the lockers where we'd had to deposit them, I approached the clerk and timidly said "tiin camera, bhaiya" (roughly "three cameras, brother/sir"). He looked puzzled for a moment, and I repeated "va tiin camera hai" ("there are three cameras"). His face broke into a wide grin (although I'm sure the hindi was imperfect) and he returned the three cameras to me. I responded with a "shukriya, bhaiya" ("thank you sir") and was on my way, immensely pleased with myself.

I then proceeded to bargain for something I didn't really want, half in Hindi and half in English, and ended up buying it as a souvenir of my triumph (from 75 rupees of junk down to 25, about 50 cents). Fairly skipping with joy, my Indian friends treated me to bhutta, which is a cob of corn that gets peeled, cooked in hot coals, and rubbed with lemon and chili pepper (all in front of you, so you know it's safe)-- delicious. We then went questing for more snacks, especially the famed Mysore Pak (recipe provided at the wiki link) and settled on a somewhat sketchy street food place. My Indian friends assured me it was safe, so I sampled delicious chaat and samosas. In hindsight-- a bad, bad, bad decision. Poor choice. Last week I spent about 36 consecutive hours in my room and couldn't eat anything for about 3 days. Although the source of the food poisoning may have been the even-sketchier place we went to for dinner, which I think had the second-sketchiest toilet I'd seen in India (trust me, I've seen some pretty sketchtastic toilets here).

We had just enough time to see the Mysore Palace lit (the most famous thing in Mysore-- the palace is lit up with thousands of electric lights on Sunday nights from 7-8pm) before catching a train back to Bangalore (this time on the infamous non-AC sleeper). A great weekend, and one of the best I've had so far. 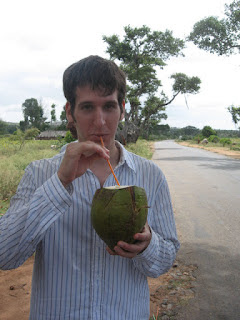 Steve and his coconut 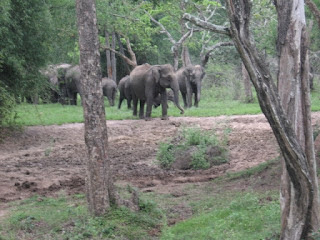 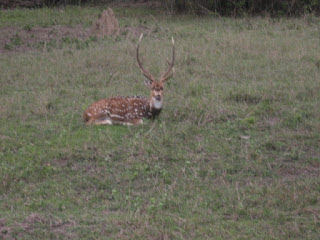 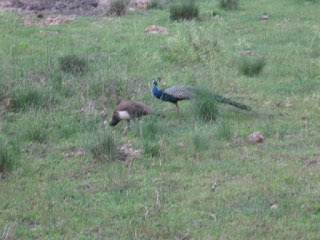 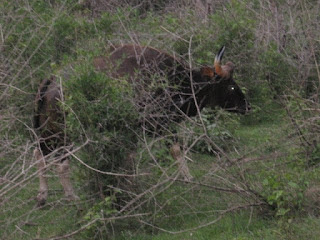 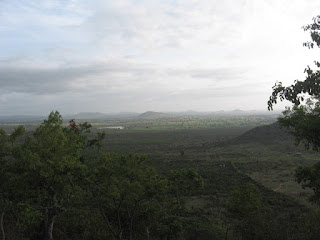 Sunrise from the mountaintop 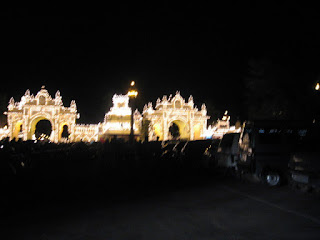 A glimpse of the lit Mysore Palace
Posted by Margaret at 2:36 PM