Slowly making my way out from under the pile of unwritten blog posts!  My goal is not to be more than a year behind.  Last summer, after visiting a lovely lakeside cottage in Québec (and visiting my own family in Pennsylvania), I was able to visit one of the most breathtaking and majestic areas in the continental U.S.: Glacier National Park. The park actually crosses the Canadian border and is known as the Waterton-Glacier International Peace Park (also a World Heritage site).  This is only the third national park I have visited (after Yellowstone and Yosemite), and it is well worth your vacation time.  Visit soon, though-- the park's actual glaciers are quickly disappearing due to the advent of global climate change, and are predicted to disappear completely by 2030.

Our visit to Glacier was precipitated by some truly lovely friends of ours, K and M.  Two years before, at a potluck on the balcony outside of my apartment, K and M had met and quickly grown to love each other-- after five months, they were engaged.  Of their many shared interests, their joy in exploring nature led them to plan a wedding at Glacier, inviting their friends and family to experience the park with them.  The day before the wedding, JM and I flew from Pennsylvania to Spokane, Washington.  Though Spokane is 5 hours' drive from GNP, it is one of the closest major airports; to fly into Kalispell, Montana, would have cost an extra $200-300 each!  So we Pricelined a car from the Spokane airport, thinking to drive and enjoy the scenery on our way.  However, when we arrived in Spokane, we found that our luggage had not deigned to follow us.  This presented a slight problem-- all our clothes for the wedding the following day were in our checked bags.  Our flight was late getting into the airport, as well, making it impossible to get to our hotel before the front desk closed.

After some anger and frustration with airline personnel, who insisted that they could not get our bags to Spokane before the next day, let alone to GNP in time for the wedding, we managed to get our car from the rental company.  We had ordered a "special" car, which meant that we paid for a compact car but would receive whatever they had available, potentially getting a great deal.  Indeed, we received a big SUV for the price of a compact!  Thinking ourselves clever, we loaded our things with plenty of room to spare-- only then did we realize that the lower gas mileage of the SUV would actually end up costing us much more in the long run than if we had actually received a compact or economy car.  Sigh.

After a speed stop at TJ Maxx for some clothes and toiletries (including wedding clothes), and a slightly longer stop for dinner, we finally got on the road to GNP at about 6pm (four hours later than we had intended).  The mountain- and forest- speckled drive was quite pleasant, especially around Coeur d'Alene in Idaho.  However, as we crossed state lines, we realized that we had forgotten about the one-hour time difference between Spokane and Glacier, putting our arrival time at midnight instead of 11pm.  Well, we thought-- how much worse could it be?

A lot worse, as it turns out.  Though we made good time and did indeed arrive at our hotel at about midnight, we had a spot of trouble searching for our room.  We looked for ten minutes before JM discovered that the innkeeper had left us instructions on the back of the envelope with our keys; we were in an entirely different building.  Finally, we arrived at the door to our room, only to find that the key didn't turn in the lock.  JM wiggled it carefully; still no luck.  Applying a little more force, he attempted to unlock the door... and the key broke off in the lock.

I won't lie; JM is lucky to be alive.  I almost killed him right there.  We stood for a moment in shock.  Then, before I could explode, he went for the last-ditch effort of knocking on the door to the main office and calling the telephone there, knowing full well that no one would be awake or within earshot.  However, by a stroke of incredible luck, the innkeeper's apartment was next to the main office.  An older woman in a flowery nightdress shambled over to meet us, took one look at the broken key in JM's hand, and said vaguely "ah, yes, it does that sometimes."  She then pulled a pair of pliers and another key from a drawer and handed them to us sleepily.  Still stunned at our good fortune, we tried the second key, which turned smoothly in the lock.  We thanked the innkeeper profusely and stumbled, at long last, into our room with its waiting bed (after what had almost certainly qualified as a terrible, horrible, no-good, very bad day).

More to come (not terrible or horrible, but beautiful, joyful, and full of grandeur and storybook scenery)-- stay tuned! 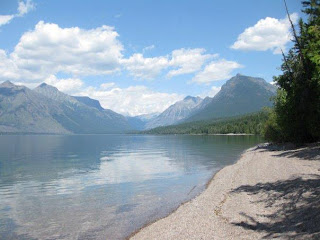 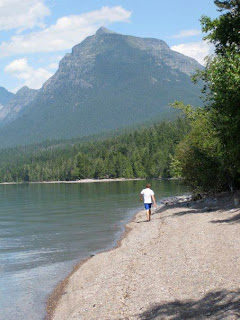 JM, searching for the perfect stone to skip 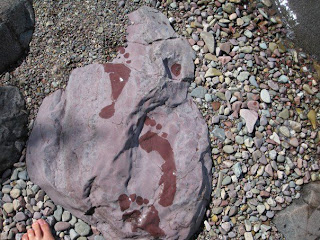 Footprints on the beautifully multicolored, pebbly beach
Posted by Margaret at 1:30 AM 1 comment: