I am determined to have this blog up to date before I leave for Bombay in 5 hours.

Last weekend was the trip we'd been waiting for for weeks . . . the Infosys-sponsored trip to Cochin, Kerala. For those of you who don't know, the Indian state of Kerala is known for its incredible scenic beauty and tranquil atmosphere (and its seafood!) We left Infosys campus at about 6:30pm (which, on Indian Standard Time, translated to about 7:15. From there we took two full buses to the central city railway station, where all sixty of us boarded a train bound for Cochin.

Indian trains are famous for being crowded, dirty, and smelly (what people call "a real cultural experience"), but except for a healthy dose of cockroaches ours was okay. There were so many interns and InStep staff that we had reserved an entire train car just for ourselves. We traveled in 3-AC, meaning air-conditioned cars with 3 tiers of bunks that folded down into seats. Each compartment had eight bunks, but we fit about fifteen people at one point since no one seemed to want to sleep (although the train ride was thirteen hours long). We were relieved to arrive at Ernakulam Town station at 10:30 the next morning, where more AC buses waited to take us to our hotel.

Our hotel. Wow. The hotel was absolutely amazing. Infosys put us up in the Taj Malabar, a 5-star resort that was right on the harbor. It was kind of a big deal-- think waiters in turbans offering you glasses of papaya juice and jasmine flowers as soon as you walk into the lobby. My friend Nasheeta and I had a room on the top floor, with a great view of the harbor, and of course the furnishing etc was exquisite. We relaxed in our rooms for a few minutes and headed down for brunch (included as part of the conference package Infosys had gotten for us). Delicious food-- Indian food, Western food, and specialties of Kerala-- was served all weekend in a special private dining room.

After lunch we went on a sightseeing tour of the historic parts of Cochin, including an old church, some Chinese fishing nets, and my favorite: Jewtown. There's actually a district in Cochin that's legitimately called Jewtown, which is renowned for its commission-free shopping and a really old synagogue (we weren't allowed in the synagogue because it was Saturday). But still, you don't get to look around and see signs that say "Two Minutes to Jew Town!" in the U.S.

After the sightseeing tour we relaxed at the hotel (or rather, the bar in the hotel lobby) until the "Sunset Cruise," which we turned into a complete dance party on the boat. We sailed around the harbor until dark (it gets dark at about 7pm here in India, have I mentioned that?), waving to fishermen who then danced with us from their boats. A good time was had by all.

From the cruise there was a demonstration on the traditional dance/theater style of Kerala, which I had heard from other interns was quite dull (the other sixty interns went last weekend). So, my friends and I decided to go swimming instead! The pool at the Taj is beautiful and ends only about 10 feet from the water; it actually looks like it feeds directly into the ocean. Two of my Indian friends didn't even know how to swim, but we got them into the water, and by the end of the weekend they were racing each other for short stretches.

Dinner was served in the hotel once more, after which the interns split up. Some people went to go find a club in Cochin, and others decided to try to crash a private wedding party at the hotel. It was apparently going pretty well-- they were pretending to be Australian-- until they got to the bar, at which point they were firmly denied. I preferred to enjoy my five-star penthouse room, watching a movie with some friends, and then hung out in the 24-hour restaurant in the lobby until I was too tired to continue.

After an unwanted 5am wakeup call, courtesy of my friends Madhav and Madhav, we woke up bright and early (not THAT early though) for a journey into the backwaters of Kerala. The backwaters are the most famous part of Kerala-- basically the entire state is a huge delta and there are tons of waterways running in and out of everywhere. You're supposed to take a houseboat and just float along for a few days, relaxing and soaking everything in. However, we took five small canoes through very overgrown, small-channel backwaters. It was beautiful, in a wild sort of way-- the trees seemed almost as if they were choking the small creek, the banks overgrown with bramble bushes, and snakes slithering through the water alongside the boats. It was peaceful, to be sure, but very undeveloped and . . . real, I guess.

Midway through the boat tour we stopped for coconut water-- but this time we actually saw the man climb the tree, pull down the coconut, hack it open with a machete and hand us a straw. Delicious. We also got to see some spice trees growing, and try to climb the coconut trees ourselves (it's harder than it looks!). It was a cool experience.

After the backwaters tour, it was time to say goodbye to our dear Taj. We took another round of swimming and a giant lunch, and then headed to the train station for our 13-hour overnight journey home: just in time for work Monday morning. It was a fun, relaxing, and memorable weekend, and I really appreciate Infosys doing it for us. 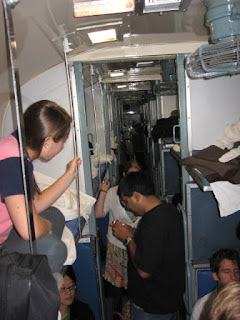 Train on the way to Kerala 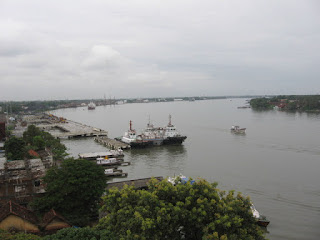 Cochin harbor, as viewed from our room 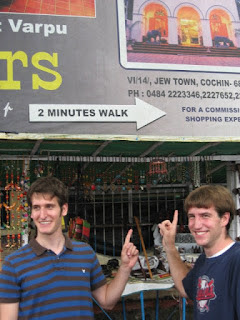 Jew town and some jews 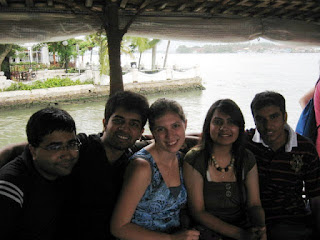 Friends on board the sunset cruise 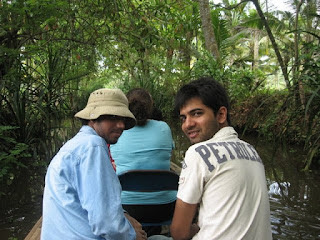 The backwaters of Kerala 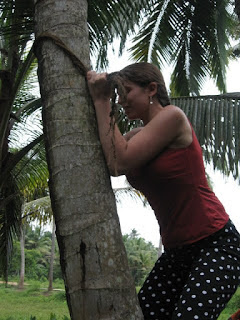 Me attempting to climb the coconut tree 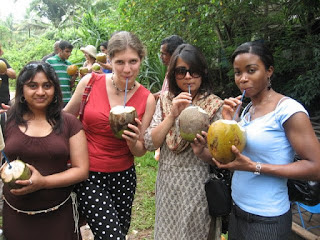 mmmm coconut!
Posted by Margaret at 11:41 AM

Hi Margaret!
Wow your trip sounds like it was fantastic! I am jealous!
Actually, I was wondering if you know where you rented the canoes from -- your trip inspired me to want to go down there this weekend and go on a canoeing trip, but I have no idea where I'd get a canoe or where I'd paddle. How far into the backwaters did you go?
Thanks!
-Eric

M
I'll be in B'lore to hand you a quiz.
Just to make sure you haven't forgotten Faraday's Law.
m