Please have patience as I update this blog with the many adventures I have had over the past year, which span three continents and five countries.  I hope to write about them soon!  Also, I will use only first initials here on out to protect the privacy/online identity/googleability of the persons mentioned.

Last summer I had a chance to visit the beautiful province of Québec, Canada.  My French (and my cooking) improved by leaps and bounds--thanks in no small part to my boyfriend's mom, C.  We spent an idyllic week on Lac Ouareau (wah-ROH), near the village of St-Donat in the Laurentian mountains, about two hours north of Montréal.

As we drove away from the city-slick area around the airport, the surroundings were surprising in their foreignness.  Signs whizzed by on the side of the highway, and I tried to read and comprehend them before they vanished behind us.  Restaurant chains both familiar (Poulet Frite de Kentucky, or PFK) and strange (St. Hubert) were visible in the golden afternoon light.  All the while, a subtle increase in the colors among the wildflowers in the median signalled the approach of a new flavor of serenity.  We arrived in St. Donat via winding country roads that were not dissimilar to the ones that I grew up with in rural Pennsylvania, but with a few unexpected variants... when I asked about the odd metal tent frame that appeared outside almost every house, JM explained to me that it gets so cold here in the winter, people need roofed structures to keep the snow and ice off of their cars so that they can start them in the mornings.  We arrived at their family cabin after less than two hours, but it already seemed to be a lifetime away from the hustle and bustle of city life.

The "cabin" was anything but-- replete with twelve bedrooms scattered over two mirror-image wings, one could almost get lost trying to find the kitchen.  A sunroom and living room overlook a sloping backyard and a thin slice of Lac Ouareau, most of which is blocked from view by a thick line of trees.  The living room in the other wing serves as a game room, and the opposite kitchen has become JM's father's workshop.  The building used to house botany students during summer classes or fieldwork; there are numbers on the doors, and each small bedroom has its own sink.  A pathway through the trees at the edge of the yard leads to a long dock and a gravel beach, on which is perched an orange catamaran sailboat.  Everything is surrounded closely by dense forest, as if the house and yard were simply dropped into a small clearing.  Though other houses surround the lake, isolation is the word of the day.  It is a truly beautiful spot.

My family's idea of "vacation" usually involves a beach and a book (or in my case, a stack of them).  Days are passed quietly, sunbathing and swimming, perhaps walking along the shore.  Not so with JM's family.  Over the course of a week, there was hiking, biking, swimming, boating, tennis, and more; no one could sit still while there was daylight to be had.  My mind-- and my legs-- worked hard trying to keep up.  As the sun set, however, the family finished each whirlwind day in the sunroom with a good meal, a bottle of wine, and conversation that often lasted late into the night by flickering candlelight.  Dinner was followed not infrequently by a game of darts, glass of whiskey in hand.  With good spirits, we bid one another good night and retired to bed, where the pitch darkness and utter silence lulled me to sleep.  Each day held new adventures, but not before the morning ritual of jumping into the chilly lake before breakfast!

My time in St Donat was idyllic, peaceful, and restorative-- all the things you could want a vacation to be! I hope to return this summer for an encore.

(I also got to spend a little time in the suburb of Montréal where JM grew up, though I didn't see the city-- hopefully someday I will see the city itself!) 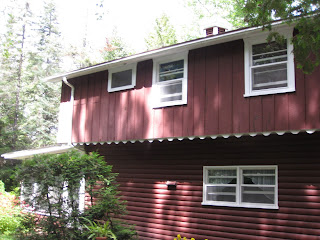 The cabin in St Donat 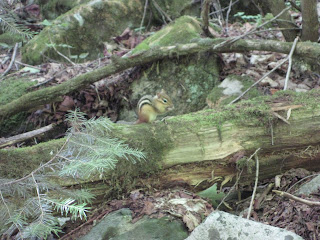 "Une suisse" (the colloquial French word for chipmunk-- I wonder how the actual Swiss feel about that?) 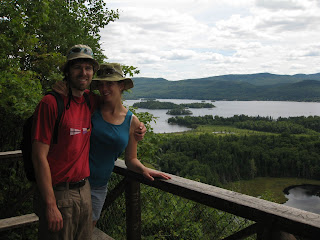 On a hike overlooking a network of lakes in the area 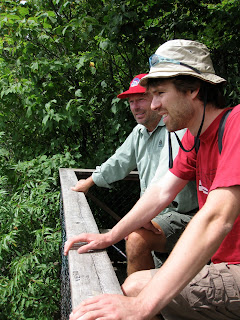 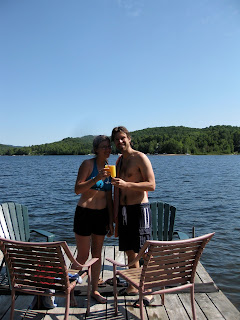 My birthday began with mimosas on the dock and ended with lobster and chocolate cake :) 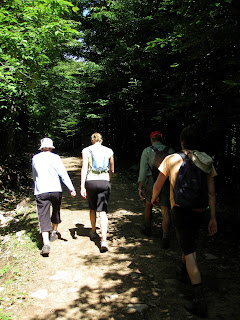 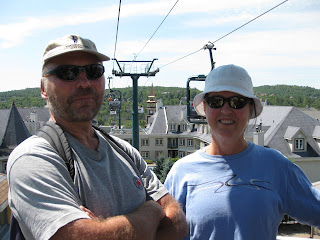 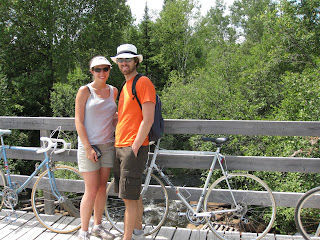 On a bike ride in a national park near the cabin 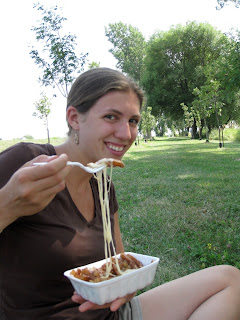 My first taste of poutine! 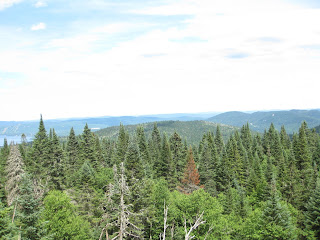