Buses, Biryani, Bibles, Bargaining, and Babies-- a weekend in Hyderabad

I’m apologizing in advance for the unforgivable length of this entry.

After a ten-hour, overnight journey (punctuated by one 3am crash that wasn't serious enough to stop for, although we found later that it had spidered the windshield pretty good) on a semi-sleeper bus--seats that recline up to 45 degrees, but no beds--we arrived at the bustling Mahatma Gandhi bus station, where we were immediately accosted by taxi and auto-rickshaw drivers. They wouldn’t let us go easily, especially when they figured out we were having trouble connecting with our taxi driver. We walked around the bus station several times, passing the same shops full of junk, unhygienic food stalls where we feared to stop despite our unhappily empty stomachs, and the crowd of now-predatory-looking taxi drivers.

We eventually located our driver after several calls to the taxi dispatch center, only to discover that he spoke almost no English—an ironic thing to happen on my first weekend trip without someone who spoke Hindi. Trial by fire, I guess—with his tiny bit of English, Faisal’s and my bits of Hindi (mostly Faisal), and the Hindi-English dictionary I’ve taken to carrying almost everywhere, we managed to get where we were going without any major disasters (although the driver did keep attempting to take us back to Infosys campus rather than the palaces, forts and monuments we had planned to see for the morning). Our first stop was the Charminar, ’s most famous monument. It literally means Four (char) Minarets (minar), a random structure in a kind of town square that was topped with four towers. It was thoroughly overrated, but worth a look (especially since it’s the figure that goes on most of ’s postcards).

After our driver had been driving for a good half hour, we realized that we probably weren’t heading for Chowmahalla palace, the location we had requested. “Infosys?” he said with a puzzled look on his face. No, we explained, (careful to articulate each syllable because he had somehow gotten “Infosys” out of it the first time). The palace was about 100 yards from the Charminar, and we could have walked rather than taken 45 minutes in a cab. Ah well, such is life.

was basically a museum and testament to the history of the Nizams, the old rulers of . It was quite interesting, as are many of the historical places I’ve visited, but I can’t help wishing for a better grasp on Indian history in general, as my knowledge is woefully inadequate. It makes it quite difficult to fit together the many different facts that have been crammed into my head over the past 5 weeks—the British, the Moguls, the native tribes, sultans, rajs, all kinds of people and places and invasions and cities.

Lunch was at the famed Paradise Hotel, recommended by all our friends native to plus a good many others. is famous for its biryani (a dish of steamed rice with vegetables or meat), so that’s what I had for lunch. Delicious, as always, but I have a message for the people of Andhra Pradesh: your food is too spicy. end of story.

Finally, we instructed our driver to take us back to Infosys Campus, where we planned to drop our stuff and freshen up before the evening’s activities. However, our streak of bad luck with cabs (which wasn’t going to die anytime soon) continued and the car broke down twice on the way there. Too hot and tired to do anything active, we waited passively until the driver called one of his buddies to come and pick us up. The whole thing made me really wish I actually spoke Hindi, and although I won’t come anything close to proficient by the time I leave, I’m determined to learn as much as I can.

After being initially denied rooms at the ECC, then finagling our way into an incredibly huge and luxurious room, we set off for my favorite site of the weekend—Golconda Fort. Escaping from a coalition of insistent tour guides, we scrambled up the fort face, eschewing paved sidewalks in favor of dirt paths and old, crumbling rock walls. The fort was huge and definitely the best monument out of the weekend. After we had scaled the fort in less than an hour and made fun of the Moguls who took eight months to do the same thing, we headed down (through a cave full of bats!!!!!!) to an amphitheater-arena-type thing (from which you could see most of the fort) for the “Sound and Lights Show.” It was pretty cool—a well-done (English!) narration of the history of and its rulers, with different parts of the fort lit up in different colors to emphasize parts of the story. Although it lasted an hour, it was worth it to hear some of the stories behind the vast structure.

Our bad luck with taxis continued as we had to repeatedly call the dispatch to get them to send someone to pick us up at . Note that all the taxis had been prearranged and booked several days in advance, and should have arrived as scheduled. We finally headed off for dinner with Vignan’s family—Vignan, an intern from , planned out our whole itinerary and invited us to his home in the city (although he wasn’t able to be there that weekend). Vignan’s mother cooked enough for about twenty people, and it was all the four of us could do to try everything on the table. She filled the table with delicious dishes like paneer tikka masala, sambar, coconut rice, vada and curd, mint chutney, papad, and best of all a huge plate of freshly sliced mango. We also got to meet and talk to Vignan’s uncle and grandparents, who shared stories of and in general.

We retired to the ECC with no further cab mishaps, but of course the next morning’s cab showed up at 7am rather than 8:30. Breakfast was peanut butter sandwiches in the hotel, and from there we went to a church we’d found on the Internet (always the best source for these things . . .) called the Hyderabad Apostolic Christian Assembly. It was actually held in a YWCA (!) in downtown . We were greeted with quizzical looks and warm welcomes from the pastor and worship team, and the service began at precisely 10am (that’s when the power goes on). It was an incredible joy for me—the band, the singers, and familiar songs like How Great is Our God, Here I am to Worship, and even Days of Elijah were heartbreakingly familiar and a comforting reminder of home. Even side-by-side with songs in Tamil, Telegu, and Hindi, those familiar songs of praise were all I needed. The rest of the service was not unlike an African-American Southern Baptist church—endless singing, prayers, testimonies, enthusiastic prayers, and a fiery sermon took the service to about 2 and a half hours. It was quite an experience, and a good reminder that the Church is alive and growing here in India.

We spent the early afternoon at various parks around Hussein Sagar, the big lake in the middle of the city, taking a boat ride to see the giant monolithic Buddha in the center and waiting unsuccessfully for Indian children to vacate the playground swings. A final bout of cab distress led to the agency just letting us keep our cab for the rest of the day, since they were so tired of dealing with us. We took our hard-won cab to Salar Jung Museum, a huge museum full of everything from ancient swords to Italian marble sculptures. We had time only to explore a fraction of the museum before it closed, but I would really like to go back someday as the works it contained were really incredible. Also, on the way into of the museum a lady actually pushed her baby into my arms and asked if I would take a picture with her child. A little weird, but the baby was adorable :)

The remainder of the evening was spent on dinner at the wonderful (NOT!) Hotel Shadab (Lonely Planet, you have failed.) and wandering around pretending to be interested in buying things. In one particularly notable shop, I asked the price (I’m getting quite good at doing that in Hindi these days) of a dupatta that I mildly liked, and the shopkeeper responded with 150. As expected, I immediately shook my head no, so the proprietor countered with “Two hundred.” Double take. I think he sensed my confusion, so he attempted to appease me by offering 250. As the other three shopkeepers started cracking up around us, I gently said “uhh . . . I think you’re going the wrong way.” Perplexed, he said "tell me the right way, I don't know the right way." I shook my head and said "...I'm gonna go find my friends now," leaving the confused man to figure out his failure.

After several other photo requests and aggressive shopkeepers, we headed to the bus station to find our A/C semisleeper, complete with scratchy blankets and an outrageous south Indian movie (movies produced in the south tend to have crazier dancing, more intense fight scenes, impossible stunts, and apparently superhuman actors). After an exhausting day, I fell straight to sleep, and the bus arrived with no crashes or unusual events to Bangalore the next morning. Our bad luck with cabs was finally over-- we found our driver and he took us to Infosys, just in time for work this morning!

Stay tuned, I feel that a very interesting entry is coming later this week. 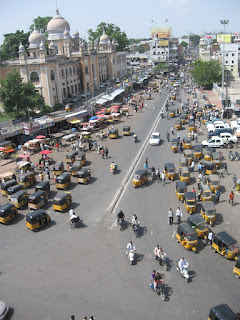 View from the top of the Charminar 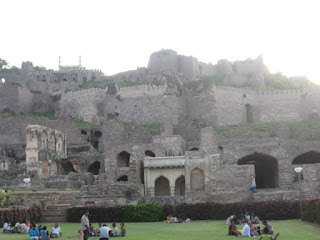 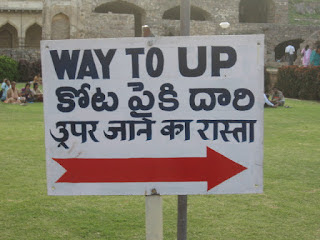 The Way to Up. 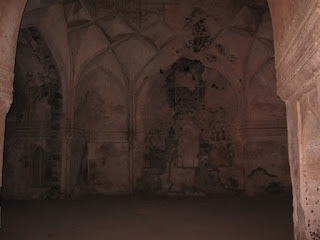 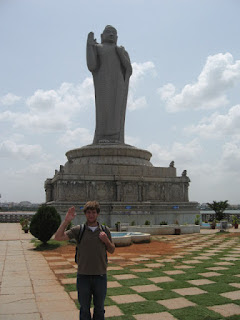 Got back today and I think I took all the same pictures you did! Except that there's more rain in mine. Whether it's in Bangalore or Princeton, look forward to seeing you soonish.
-Alice