On a multiplicity of monuments -- Delhi/Agra

Last week in a nutshell:
Worked late every night due to limited software licensing and will continue to work till ~7:30 each night. bummerrrrrrr. Went out on Wednesday night to a club called Zero G, which is pretty popular (apparently sometimes visiting Bollywood stars come here when they're in Bangalore). Wednesday night is Bollywood/Punjabi music night so we were all trying to figure out how to dance that way . . . a challenge for me since I can't dance the regular way. right. BUT I am learning, and when I come back I will try out for Naacho (ha).

Also, I found a lizard in my room, caught him in a box, named him Ralph, and carried him outside.

On to the good stuff. This weekend's trip was to Delhi and Agra to do some virtually mandatory sightseeing, including the Taj Mahal. On Friday morning at 1:30am, about 30 interns set off on a bus to the airport (2 hours away) for a 5:45am flight to Indira Gandhi Interna 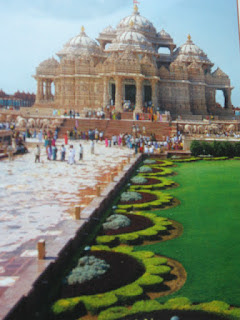 tional Airport in Delhi. The flight was delayed by an hour, but we eventually arrived at 9:30 am in Delhi-- tired, grumpy, dirty and ready for a day of sightseeing (not). At the airport, 4 interns from Chennai and 1 intern from Pune joined us to board our 35-seater airconditioned bus, which would quickly become our home away from home (that is, home away from hotel away from Bangalore away from home). We picked up our tour guides, Ashish and Angelina (? I think that was her name but I can't remember), who were absolutely invaluable and stayed with us the entire weekend. Our first stop was the Akshardham Temple (right), built quite recently, which is apparently the largest comprehensive Hindu temple in the world (according to wikipedia). It was huge and quite beautiful-- and clean, a facet that I learned to appreciate as the weekend went on. They didn't allow cameras inside, so I had to be content with a postcard (of which I took a picture, in order to upload for your convenience). 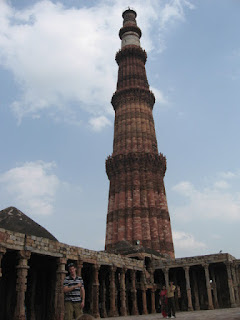 The weather was quite hot, much hotter than Bangalore, so we were all grateful to be able to put on our shoes and head for the bus. Our next stop was a place called Qutub Minar, a giant minaret. Our tour guide was very knowledgeable about the history of each place we visited-- I'll spare you the details and let you read it on the wiki link if you want. But it was p cool-- there was also an iron obelisk in the middle that held some record that I forget. At the left, you can see my friend Steve with Qutub Minar, just to get a sense of the scale (it was enormous).

That was about all we had time for in Delhi that day, as we had to make the 6-hour drive to Agra that night. We stayed at the Howard Park Plaza in Agra, which was actually quite nice and more than I was expecting for the total price of the trip (we paid around 13000 Rupees for the entire tour, including airfare, accommodations, two meals, bus, and tour guide). Exhausted, we all collapsed for the night at around 11pm. 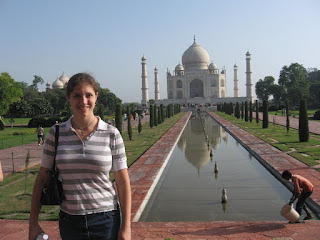 At 6am the next day we headed off for the Taj Mahal, the biggest site in Agra and pretty much the only reason people go there (there's not much else to see). However, we were rewarded for our early rising-- had we gone any later, the entire complex would have been closed due to a visit from the president of Syria (?!?!). It was beautiful; some of the marble work is absolutely exquisite. However, in the words of my friend Sasha: "you can't forget that there's a dead body in there." Too true :) We stayed at the Taj for about an hour and a half, took way too many pictures, and headed back to the hotel for breakfast at about 8:30. Our next stop was actually my favorite of the entire weekend-- we went to a marble factory, where they showed us how works like the Taj (but mostly smaller things like plates, vases, sculptures, and other artwork) are made. Each piece is hand-inlaid with semi-precious stones like lapis lazuli, turquoise, and garnet, and some of the pieces are absolutely beautiful. They didn't allow photography or else I would definitely have taken 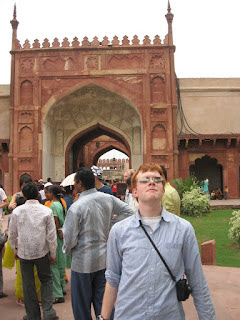 pictures. Only the lack of cash in my wallet prevented me from buying their entire stock; when I am rich and famous I will go back and do just that.

Our next stop was the Agra Fort, where Mogul emperors of India lived and quartered soldiers (picture at right is my friend Jon responding to the prompt: "make a fort face"). This was where the picture taking really got out of hand (by which I mean random Indians coming and asking to take pictures with me). It was bad at the Taj, but at the fort I seriously could not walk more than 15 feet without getting asked for a picture. Sometimes people even chased me down if I tried to walk away quickly. We also got videoed this time. What a weird feeling . . . maybe I shouldn't be rich and famous.

Last stop for the day was Fatehpur Sikri, a palace complex built by Akbar I think? It was basically old stone ruins with a great view of Agra, and also a pretty famous shrine absolutely covered with flies, stray dogs, and aggressive hawkers. Not my favorite site of the day, but maybe I was just tired. We drove back to the hotel at about 7pm, just in time to go out for NORTH indian food . . . which is SO much better than South Indian food. My new favorite: Navratan Korma. DELICIOUS.

The next day we were up early for the drive back to Delhi. We did some drive by sightseeing including the Lotus Temple and the Gateway to India, a big arch that looks like L'Arc de Triomphe in Paris (both are pictured at the end). We stopped at an open market for about an hour, which was crowded and crazy and awesome. Didn't buy anything but I'm determined to find one in Bangalore to test my bargaining skills.

We took a 7:30pm flight back to Bangalore and arrived at the ECC by 12:30am on Monday morning, where we all crashed and were up for work the next morning. I'll update again soon but I've got to run to work! 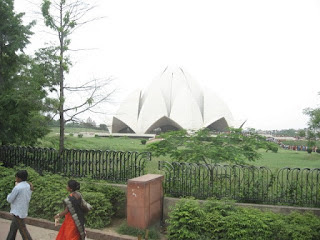 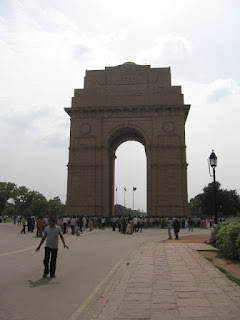 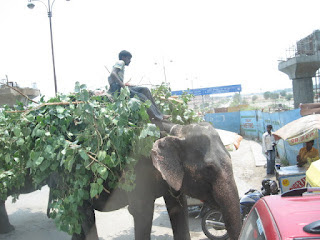 It's India Gate actually, not Gateway to India. The Gateway "of" India is in Bombay.

Interestingly, the India Gate is a memorial to Indian soldiers in the British Army who fought in World War 1.

hiee...frndzz..i m here.to share my feeling..its really a memorable day for me in bandipur resorts i enjoyd a lot with my family..if u visit u ll defintly njoy d weekend...

If you looking for Affordable Tour guide in Agra, touritor is one of the best company which help you to Book tour guide.

Touritor is the best when you are going to plan a Agra tour. Touritor provides Best Tour Guides in Agra.

Thanks for sharing this important information.
Agra Tour guide
Tourist Guide for Agra