On being a tourist (attraction) -- Pondicherry 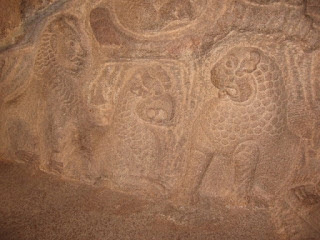 I am so behind on this blog it's not even funny. Seriously. So much has happened in the past week! Let's start with the end of last weekend . . .

We woke up early Sunday morning to take our bus to Pondicherry, stopping on the way at Mahabalipuran, an absolutely amazing collection of beautiful ancient temples and carvings (see left). There were hawkers absolutely everywhere, trying to sell us things but also willing to laugh and joke with us when we clearly weren't buying. 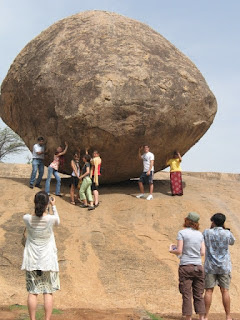 To the right is a bunch of interns holding up my current favorite stone formation: Krishna's Butter Ball. I kid you not. Krishna is definitely my favorite Hindu figure-- he plays the flute, fights snakes, and apparently loves butter. Not to mention he's blue, and therefore all-around awesome. Apparently the British tried to tip it over and couldn't, not even with seven elephants. Or nine, or ten, depending on which tour guide you talk to.

After Mahabalipuram, we went on to Pondicherry. Pondicherry is a former French colony, which is now officially named Puducherry. Which I think is hilarious, because it's role-reversal linguistic corruption (i.e. Bangalore is an English corruption of Bengaluru, the city's original name, whereas Puducherry is an Indian corruption of Pondicherry). Over the course of the day, I got my first real experience of being a human tourist attraction. Hundreds of Indian people (themselves tourists, coming to Pondicherry to enjoy its beaches and European flavor) stopped to stare at the parade 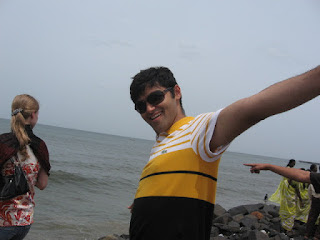 The beaches were pretty rocky and not good for swimming (see pic of Manav at left), but the promenade itself was nice. We decided to eat lunch at a little cafe that was outdoors-- no air conditioning, but great ambiance. Or so we thought.

We sat down and were looking at the French-influenced menu, which actually looked pretty good, when we looked into the courtyard and saw a couple of men scuffling with a teenage boy, who broke away and jumped over the fence while the men chased him with sticks. That's odd, we thought. And yet we didn't think to switch restaurants. We wait and wait and wait until finally someone goes to talk to the waiter, who explains rather grumpily in poor English that sorry, we were dealing with some trouble outside and could we please write down our orders. That's odd, we thought again, and were beginning to have some misgivings about our charming cafe. We wrote down the orders of about twelve people on a napkin and gave it to one of the grumpy waiters, noticing that at the moment we were the only patrons. That's odd, we thought, and seriously considered moving. HOWEVER, much to our (later) dismay, we remained at the cafe. We had to write down or order two more times, wait approximately seven months for our food to come, were told (after most people had gotten their food) that they did not have dishes x, y, and z; we were improperly billed, verbally 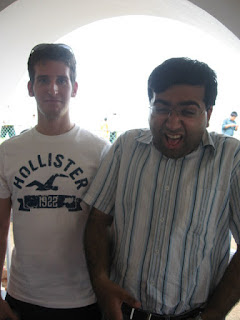 abused by waiters, and remained free of any sort of service whatsoever. It was actually quite amusing in hindsight . . . at one point every male at the table went into the interior of the cafe to yell at the staff. Even Manav, the most even-tempered person I've ever met, was literally trembling with fury. You can see how Kersi and Steve felt about the cafe -->

After our wonderful cultural experience-- actually, exactly the opposite of any experience I've had here; usually people are extraordinarily warm and friendly--we walked around Pondicherry, bargained with hawkers, bought baguettes and cheese and fruit for dinner, and boarded the bus home. There's no national highway between Pondicherry and Bangalore, so we passed through many villages and back country areas on what was without a doubt the worst road I have EVER been on. Kind of like being on a roller coaster, actually. For seven hours. But we returned home safely, just in time to wake up for work the next day!

Oh, I also saw my first Bollywood movie(s) on the bus: Om Shanti Om, which is apparently really good (although it was so complicated and bizzare I needed an Indian to narrate the plot, despite having English subtitles), and a movie called Krrish, which is apparently really terrible even by Indian standards (although I quite enjoyed it, seeing as I fell asleep for an hour in the middle, woke up and realized the plot had moved nowhere and they were STILL SINGING AND DANCING and I hadn't missed anything).

Wow. Okay, there's tons more to write about but I've got to go grab some sleep before work tomorrow. I'll end this entry with pics of the beach and wedding in Chennai . . . enjoy! 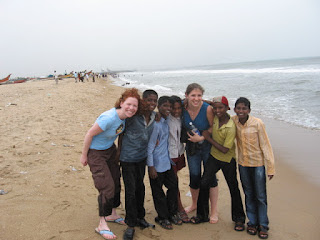 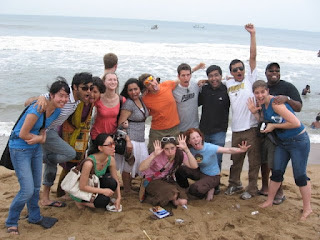 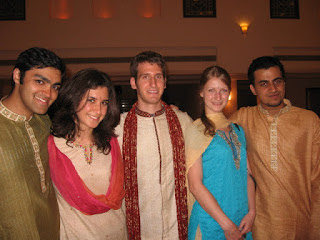 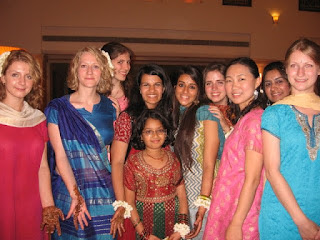 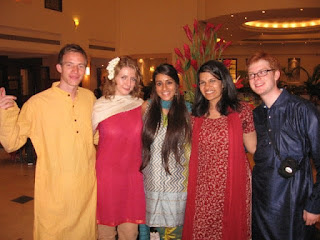 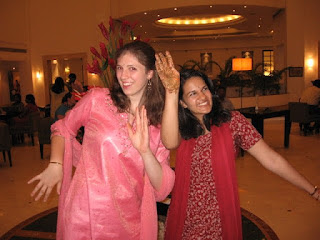 i love the butterball. it looks like it is about to fall over any second.

and that's really funny that you are a tourist attraction there.

it sounds like you are having an amazing time. keep blogging!!

Mahabalipuram is a treasure house of ancient Tamil art, culture, civilization, & history. A coastal city, Mahabalipuram has an immense place of importance in Tamil history and mythology. This beautiful coastal city of Tamil Nadu is ordained with a number of temples and places of archeological importance. It is not surprising therefore, that because of the overabundance of these places Mahabalipuram is often referred to as a legacy in stone. The unique instances of art, culture and architecture that has been preserved by the kings of the then Pallava dynasty proves to be a delight to the eye even today and it is not for nothing that Mahabalipuram is known as an “open air museum”. The richness of Mahabalipuram has made it one of the most favorite tourist places of South India. Hotels in Mahabalipuram are for tourists from different walks of life. As the place is more of a tourist destination rather than a business one, there are many leisure hotels and budget hotels in Mahabalipuram.

A city of southeast India on the Bay of Bengal south-southwest of Chennai (Madras). It consists of four former French coastal settlements whose administration was transferred to India in 1954.
Sydney Hotels

Your post is very useful and interesting. I liked it very much and felt beneficial for all, if they have any doubt about the above mentioned topic. We can learn some valuable tips from this blog. You can have a look on my forum, I would be waiting for your valuable response. Thanks in advance.


i have been to bandipur resorts last weekend its an amaizing place to spend ur time,there is kgudi resorts near next week we are planing to visit over there

Thanks for sharing above information! I really appreciate this post, if they have any doubt about the above mentioned topic. You can have a look on my Dog Buy & Sale classified, I would be waiting for your valuable response. Thanks in advance.

I read your articles. It is simple but very accurate info… Many thanks for sharing this one.
PetClubIndia
Online Pet Shop