...was phenomenal. was amazing. was fantastic. was the best time I've had in a long time.

We had decided a few weeks ago that we absolutely couldn't miss seeing Goa, the beach and party capital of India, and last weekend 16 of us spent a lazy, sunstruck, beach-filled few days at Bogmalo Beach in North Goa. Let's start at the very beginning (a very good place to start . . . shout out to my friends in SC in the State Theater's Sound of Music last weekend!)

8 people took Friday off work and flew down to Goa on Friday afternoon. I, however, am budgeting very carefully after figuring out just how much I was spending (it's easy to spend a lot here because everything is SO cheap). So, I joined the other half of us in taking an overnight sleeper bus from Bangalore to Goa. After a panicky cab ride through Bangalore-- we had to get the ONE slow, safe driver in the ENTIRE city and were terrified that we would miss the bus-- we made it with minutes to spare. The bus was like any other bus, except instead of seats it had cramped, bunked beds. On either side of the aisle there were the equivalent of a set of twin bunk beds, with two people to a bunk. I settled down for the night with my friend Katya, so at least I didn't have to share with a stranger. The bus made bathroom stops every four hours during the night; however, it proved to be quite comfortable and easy to go right to sleep, waking up the next morning in Goa. Not such a bad way to travel, especially at 750 rupees rather than 3000 for a flight!

When we got off the bus in Goa at 11am on Saturday, we were immediately hit by the heat and humidity of the new state. We're definitely spoiled with Bangalore's high altitude and amazing climate. We boarded a cab and were at Manav's house by noon.

About Manav's house . . . it's absolutely beautiful. His parents have a 3-4 story house that's a ten-minute walk from Bogmalo Beach (you can see the Arabian Sea from the rooftop terrace). There were plenty of beds and couches to fit 16 people, and the house is only a few minutes from restaurants, resorts, and of course the beach. As soon as we dumped our stuff, we went to a little place called Claudi's that served Goan specialties in addition to standard Indian fare; Goan cuisine is defined by both its Portuguese heritage and its ready access to fresh seafood. And of course, everywhere there's Kingfisher-- no restaurant is complete without it here, especially in Goa since the guy who owns both the airline and the beer lives in North Goa.

Then to the beach. One of the most beautiful beaches I've ever seen, with palm trees everywhere and beautiful hills and crashing surf. The water wasn't too safe to swim in because it was monsoon season, so of course we went in anyway (but didn't go out too far . . . don't worry, we were safe!) . The beach itself was pretty empty since it's not tourist season, but our presence drew out several of the locals and we were once again called upon for pictures. I have got to learn how to stick with a group, since it's only when I lag behind that people do that to me. Anyway, we lounged around the beach for a while, swimming and reading and sunning, and then back to the house to change for dinner. Most people walked, but I convinced my friend Amit to give me a ride on the back of the motorcycle he had rented for the weekend. That was probably one of the coolest things I did all weekend-- ride a motorcycle through the jungle, hurtling along a path through tall rainforest trees with not a house or another soul in sight.

We all cleaned up for dinner and then headed out in cabs to a small open-air restaurant across from Tito's, the hottest club in Goa. Apparently in peak season (December) you can't get within five blocks of the place with a car, it's so popular. After dinner (about 11pm) we headed to Tito's for dancing and having fun, and it did not disappoint-- its reputation is well-deserved :) The only trouble came when we tried to go walk on the beach . . .

So we went to walk on the beach, and a few people (not heeding the warnings from the rest of the group) decided to dip their toes in the water. Then the trouble started. We were approached by some local policemen and told that you can't be on the beach right now, it's not safe. Which is fine, so we called to the two people who had gone down to the water to come out. But too late, the corrupt and bored policemen had gotten the scent of rich foreign tourists and were not going to come out of it without a bribe in their pockets. As other people (native Indians I guess) streamed out onto the "unsafe" beach, the policemen ignored them and threatened to take us to the station etc etc. The conversation was all conducted in Hindi with me and the other non-Indians a good distance away, so I'm not quite sure what transpired. All I know is that it involved much apologizing, much restrained/disguised exasperation and even some fake crying on the part of the two guys trying to get us out of the whole situation. In the end, they managed to get us away without a bribe or anyone going down to the station, and insist that nothing could possibly have happened and that the guy was just a lowly constable with no power, but it was still a little scary (and makes a good story to tell).

We stayed at Tito's till 3am, then boarded the cabs for the 1.5 hour drive back to the house, where we crammed 16 people into five bedrooms, and slept until the sun woke us the next day at 11am. The next stop was Sunday lunch at Martin's Corner, Goa's most famous restaurant. The restaurant had definitely soaked up the attitude of Goa-- relaxed, laid-back and never in a hurry-- so we spent a good 3 hours enjoying dishes of vindaloo, xacuti, prawns balchao, paneer tikka, and the specialty of Goa, bebinca (a six layer flourless cake with ice cream). After we had digested enough to move again, we headed back to the house to pack and clean, enjoying one last cup of chai on the rooftop terrace before driving to the airport. Although I was sad to leave Goa, I was definitely excited to be back in Bangalore's cool climate and my own room and bed in the ECC. Back to work now, but I'm sure there will be more adventures to come! 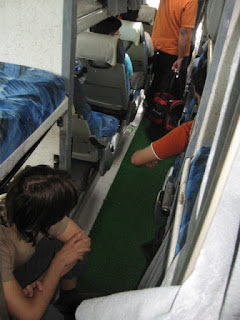 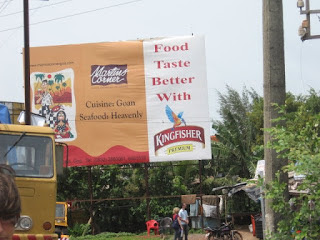 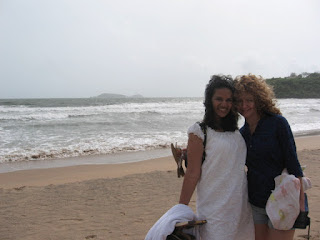 Ami and Yana, interns from Chennai <3 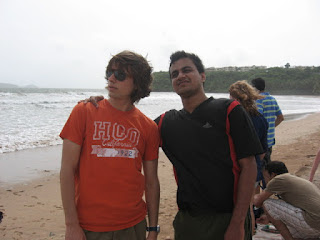 George and Tejas being bhai, or gangster. 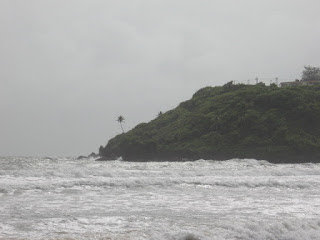 Hey, by the way, beautiful Bangalore babe, do you have skype? We should call eachother, especially since we're probably closer timewise than we are with our respective families. :)

Hi. Came across Steve's blog through LivePSU. Have since read his blog, Matt, Joel, Dr. Petrick and now yours. Looks like you had a lot of fun. Despite growing up in Bombay and Pune, I have sadly never visited Goa. Hope to remedy that on my next trip to India.

Have fun in Bangalore. I'll now read the rest of your India-visit blog entries.

So jealous, Margaret, so jealous.

Loved your blog, thanks for sharing such blog. Waiting for more such post. Looking for a car rental in Goa , Visit :

Loved your blog, thanks for sharing such blog. Waiting for more such post . Looking for a Bike on rent in Goa , Visit :