SOMEWHERE ON A BUS BETWEEN CHRISTCHURCH AND QUEENSTOWN
April 13, 1:19pm

On Easter Sunday, I was up before the sun-- but this year, it was because I had a 7am bus to catch. Grabbing a quick breakfast from my stash of apples, muesli bars, and hot cross buns, I made my way to Cathedral Square once more. I caught the daily service from Christchurch to Picton, planning to get off at Kaikoura.

The drive was my first taste of the beautiful country I'd been promised . . . and it did not disappoint. After I woke from a brief nap, my eyes were assaulted with green as the road climbed and twisted its way through the steep mountainous terrain. As we drew near to Kaikoura, I could just barely see a glimpse of the majestic South Pacific, the morning light glinting off its surface like a handful of diamonds. As we descended to the harbor, a quaint seaside village popped up; it was so small that a two-minute drive would have taken us right through it. The sunlight coming in off the coast filled the entire town as if it were tangible-- as I stepped off of the bus I half-expected to feel the weight of it on my skin. It was truly beautiful.

I had just enough time to take a few photos before heading up the hill to a small seaside chapel that advertised "St. Paul's Presbyterian Church, Kaikoura -- Services 10:00am -- All welcome!" The steep walkway led up to a tiny church, whose stained-glass windows flooded the sanctuary with that same extraordinary light. Although the average age of the congregation was about sixty, it was really nice to be able to celebrate Easter with familiar hymns and scriptures. All fifteen or so attendees were fascinated by the presence of two denim-clad backpackers--a twenty-something, scruffy-looking German had also apparently stepped in off the street-- and, in their Easter best, invited us to have tea after the service. Unfortunately, I had to decline; my whale-watching boat was scheduled to depart at 11:45.

However, upon arriving at Whale Watch, I was told that the tour had been canceled, as the whales were "outside our operating range." Apparently, they send out sonar-equipped spotter planes to locate the whales before sending out boats full of eager tourists. And today, the whales had taken a holiday of their own and were outside the 30-mile radius the boats could handle. Although it was disappointing, I was glad they were honest and refunded my money. I signed up for a "Coastal Tour" that left an hour and a half later, was shorter, and much cheaper, in the hopes of seeing a bit more of the harbor and at least some wildlife. In the meantime, I made a picnic of PB&J, apples, and muesli bars on the stony beach, wandered through some art galleries on the modest main street, and stopped for ice cream.

Apparently, the geology of Kaikoura makes it ideal for marine life; the rock shelves and warm water created by the underlying fault somehow create favorable conditions for all sorts of creatures, including many varieties of whales and dolphins. Kaikoura is one of the most likely places in the world to see a sperm whale, and other commonly seen marine mammals include dusky dolphins, NZ fur seals, orca, and the rare Hector's dolphin, found only in New Zealand. The boat took about forty passengers and had two levels of observation decks.

Highlights of the trip were two huge wandering albatrosses-- the bird with the largest wingspan in the world, found only in the southern hemisphere-- and some other seabirds; a colony of seals, stretched out lazily over some huge rocks; and my favorite, an enormous pod of dusky dolphins. There must have been hundreds of them, leaping and twirling and just flying through the clear turquoise water, playing in the trails left by the boat or swimming alongside it. I must have had a huge, idiotic grin on my face for at least twenty minutes as the beautiful creatures frolicked around us.

The tour lasted about two hours in total, and by the time we got back to shore it was time to catch the bus back to Christchurch. Although I don't think I spoke more than ten words the entire day, it was very restful and satisfying to spend Easter in such a beautiful part of God's creation.

The bus back/evening in Christchurch was uneventful; cooked myself some spaghetti and couldn't bring myself to face my pile of schoolwork, so I curled up with a book until my friend Steve arrived at about midnight. He'll join me for the next leg of the trip-- onward to Queenstown! 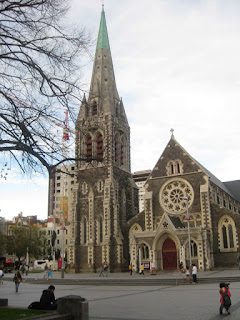 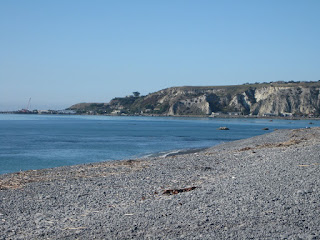 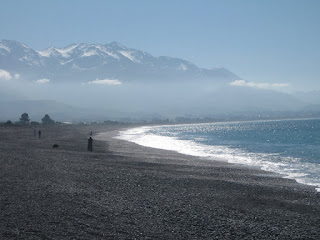 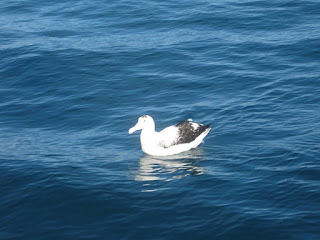 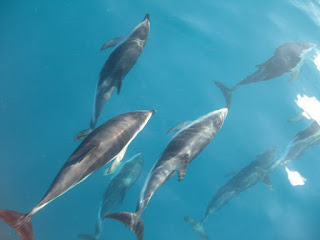 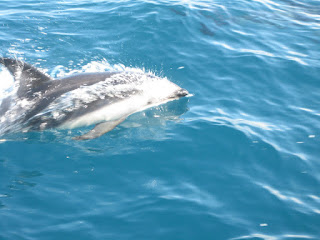 jumping dolphin
Posted by Margaret at 3:03 AM