I apologize for the time lapse before this entry, but I have been incredibly busy for the past week! I can't believe I've only been here for two weeks and a few days; it feels like I've been here forever. I still haven't even started classes; right now I'm in the middle of O-week (orientation week), the week before Uni starts in earnest. I'm not even going to try to write about O-week right now-- suffice to say that it is absolutely packed full of orientation sessions, fun events, and parties, and we don't get much time off. My next event is in less than an hour, they keep us pretty busy here at Trinity (the college where I'm staying-- more about that later).

Months and months ago, I signed up to do a program called the Melbourne Welcome, an orientation/introduction program for exchange students. I arrived at Newman College, one of the dozen or so residential colleges that are next to the Uni, on Saturday morning (the 14th). I was immediately plunged into a four-day frenzy of meeting people, walking around various places in the city, and having tons of fun as fifteen or so Australian volunteer hosts showed about hundred exchange students their city, college, and university. (Side note: college and university are very different things here. Uni is mostly just where you go to class, and maybe you join a few clubs there, but college is where your life really is. Each college has a small number of students (the largest has about 280) and is where you live, eat, hang out, play sports, and make your closest friends. Each student has immense loyalty to his or her college, although only a small fraction of Uni students stay at college. So to say "I'm at college" doesn't mean you've graduated from high school and are taking university classes, but rather that you are a member of this small community of students, each of which has a dean, registrar, library, tutors and academic support, clubs and societies, and basically everything you could need. They're modeled after the English system, so it's really nothing like res colleges at Princeton. The closest equivalent I can come up with is maybe an eating club, but you all live together and do everything together in addition to eating together and playing sports for your club/college? More about this in my next post.)
Anyway, while at Melbourne Welcome, I was placed into a host group of ten exchange students and an Australian second-year student named Ben, from Geelong (a large regional city about an hour from Melbourne). Ben was not only a great resource, but turned out to be a fantastic person as well, and a good friend. The rest of the host group (and all the other exchangers, really) was about 70% american and 30% international (mostly European). We did most of the scheduled events in our host groups, but by the time the program was over I had met almost everyone and had made a good set of (mostly American) friends that were and are a lot of fun to talk to, laugh with, and just generally hang out with. Although I haven't seen them much lately due to college activities (most of them are not staying at a college), I am excited to keep hanging out with them and maybe travel with them later on. I'll just give a few highlights of what we did on the program:
DAY 1:

We also had free time each evening, which we used to go dancing, bowling, or just sitting at a pub and hanging out. By the end of the program I had gotten to know a ton of Americans, a few internationals, and a good amount of Aussies as well.
The next day (Wednesday the 18th), I moved into Trinity College. I was one of the first here, since the first-year students hadn't moved in yet and the upperclassmen didn't move in until today. But I managed to get to know a few people through TISC, the Trinity International Students Committee, which sponsored a bunch of events like going out for dessert, a barbecue on the lawn, games in the Trinity JCR, and out to lunch in St. Kilda, the beach district. Most of the students that had already arrived were first-year international students, and a few international upperclassmen leading us around. There are only about five exchange students in all of the college, and we are pretty well scattered.
I really want to write more about Trinity, but I will have to save it as pretty soon it'll be time to go to dinner. I guess I will save O-week for a long post after it's over next sunday!!! 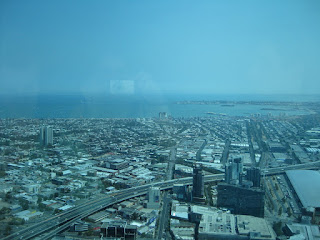 View of Melbourne from the top of the Skydeck 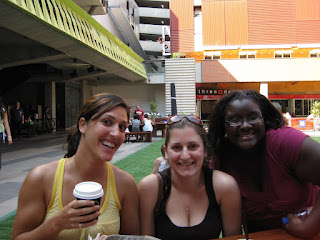 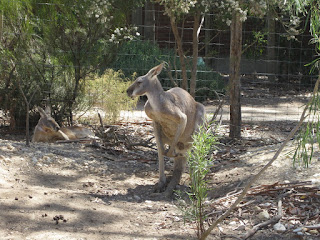 Kangaroos at the Melbourne zoo! 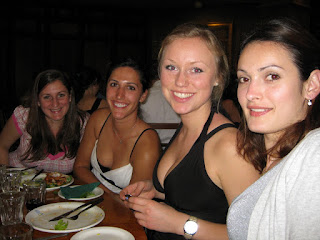 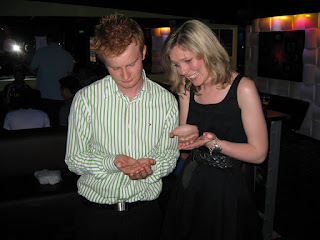 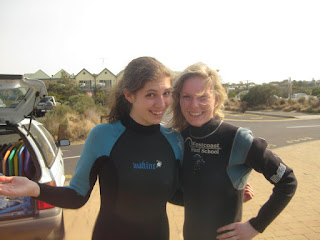 Megan and me in wetsuits, learning to surf 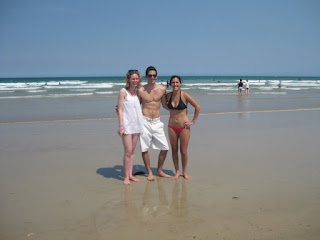 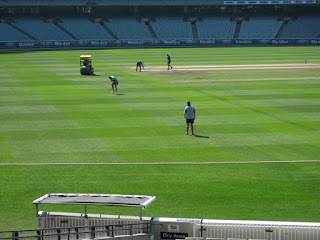 Day 2 of a 4-day match at the MCG . . . there were about twenty people watching. 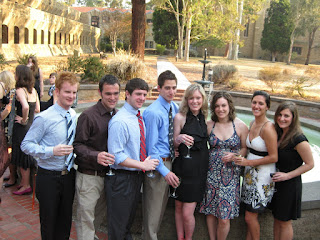 Before the final farewell dinner at Newman 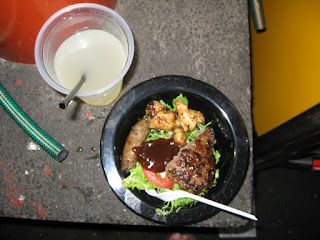 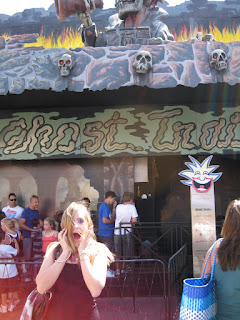 We decided to go to the old and decrepit Luna Park in St. Kilda. and ride the Ghost Train. 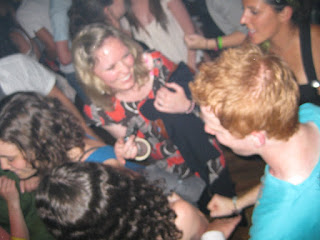