My journal is slightly more detailed here, so I can provide a somewhat vague account of what I did for three days in Udine on the taxpayer's dime (thanks IGERT!). Please bear with me if I forget the details.  Again, I apologize profusely for posting this over a year after the events occurred.

The train from Venice to Udine took two hours, if you took the express. My utter ignorance was exposed when the conductor came to take our tickets. After she figured out that I was a moronic American (apparently), she explained in no uncertain terms that you must validate your ticket before boarding the train-- and then proceeded to fine me 50 euros. (I found out later that this was a rather heartless and uncommon thing to do... I must have projected an aura of some nontrivial unpleasantness to cause the conductor to dislike me so.)

I arrived in Udine at around 7pm and attempted to find my way to the conference center using only the low-resolution cobbled-together Google Maps printout I had brought from the States. This turned out to be a not-altogether-terrible idea, as I made it to the general vicinity of CISM (Centro Internationale di Scienze Mecchaniche). I eventually had to use my exceedingly poor Italian to ask for help finding the place; to my credit, it was an almost-unmarked door in a nondescript stone facade. However, I made it to the guesthouse next to the conference center and checked into my room on the top floor. It was fairly spartan, and definitely the accomodations of an academic. However, after a long and sweaty day, it was more than enough for me.

That night I met up with Gabriele and some of his Swedish friends from KTH, Karl and Mathias. We ate at a little place on a charming square-- gnocchi with spinach for me, and then gelato (of course). This was my first of many encounters with the rose-sellers that seem to permeate both Udine and Venice: they are middle-aged Indian men who aggressively approach diners to try to get them to buy roses. We hypothesized the existence of some kind of Rose Mafia, perhaps.

Day 1 of the conference began with a quest to find one of the few banks from which I was supposed to be able to make fee-free withdrawals. Of course, this later turned out to be untrue (more evidence of the corporate evils of Bank of America), but I had a lovely morning walk, in any case. I stopped at a cafe and learned the Italian word for croissant (in case you were wondering, it is "corneto"). The day's talks were interesting and relevant, though I understood maybe half of what was being explained. Gabriele (my Italian friend who worked in our lab last fall) presented some of the results from our experiments; I had helped him prepare the slides the previous evening.

After the finish of the afternoon's talks, I walked around Udine with my new friend Karl to see "old things", which included a cathedral, a castle, and other important buildings. The younger conference attendees (i.e., those who were still students) met at 6pm for aperitivo, where I had my first spritz-- an Italian evening cocktail made from prosecco (a sparkling white wine), mineral water, and Aperol or Campari. We then met up with other conference attendees for a pizza dinner, where I sat at a table with mostly Finns and Swedes (including one of the other women at the conference. together, we made up 50% of the female attendees). The banter, though it began enjoyably enough, took a turn for the worse as one of the men at the table began to make increasingly sexist (and explicit) comments. Most were attempted and failed humor, but by the end of the evening I was genuinely uncomfortable. This is (albeit slightly more severe) the same brand of misogyny I have encountered throughout my career thus far in academia-- no one comes up to you and says "girls can't do math," but they make all kinds of stereotypical comments in the name of humor. Gentlemen: this is almost worse than outright discrimination. It diminishes and patronizes us, dismisses our accomplishments as people, and just makes us angry.

The second day of the conference was much the same as the first--fascinating talks from which I understood most of the concepts but few of the details, in the company of interesting people and delicious food. This second night was the "social dinner," held at a castle atop a hill overlooking the city.  The five-course meal (paired with five different wines) was an unbelievable example of what seems to be the typical Italian attitude toward food.  During the appetizers, I received a bonus lecture: a full-fledged seminar on the history of Berkeley by one M. W. Reeks, a British attendee of the conference.  It was thoroughly entertaining and interesting, much like his talk earlier that day.  After dinner, the young people (together with some of the younger professors) hit the bars.  I could definitely feel that I was the only woman in the crowd, but in contrast to the previous evening I felt no disrespect or stereotyping.  It was a fun evening, and a good reminder that scientists are people too! 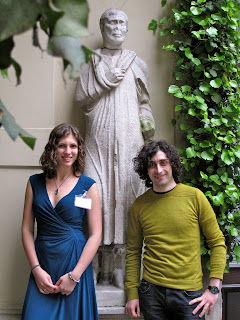 Gabriele and I, at CISM (Centro Internazionale di Scienze Meccaniche) 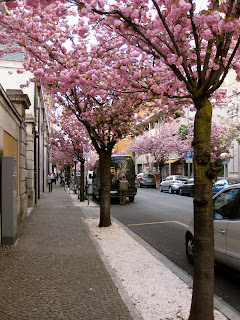 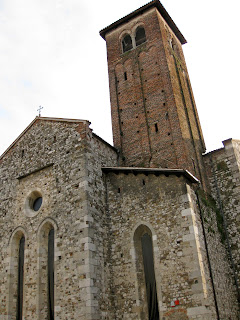 A church in the center of town 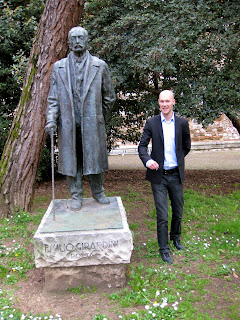 Karl, on our quest for old things 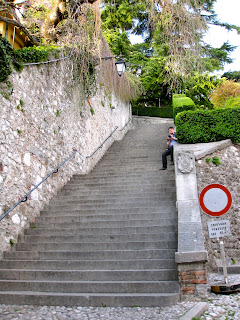 A meta-moment with an unknown photographer 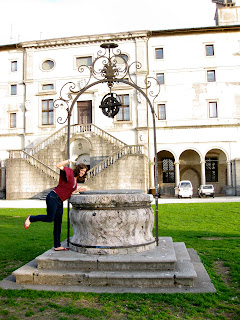 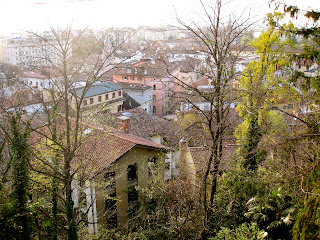 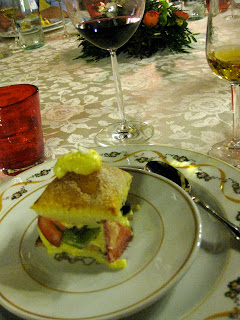 dessert for the last night... yum!

(all photos from my camera)