It is always a little unnerving to strike out into totally unknown territory… but there is nothing quite like the feeling of satisfaction and contentment that only comes after you have successfully navigated a labyrinthine tangle of strange streets and found yourself happily peoplewatching, cappuccino and journal in hand. So I found myself this afternoon in the curious city of Amsterdam, which seemed to be blissfully unaware of my meddlesome presence. I had only a few hours to spend-- an unexpectedly quick run through customs had left me with a rather long layover and only a twenty-minute train ride between me and a city (and country) I'd never before visited.
So, I boarded the train to the Amsterdam Centraal station, with no plans but a vague idea that I might walk around for a bit and get lunch. I had no map, nor any idea of the city's layout, so I simply walked wherever I thought would be interesting. As it happens, steps away from the railroad station is the center of the red light district, which I of course chose to meander into. In my defense, part of the reason Amsterdam is so bizarre is that this setting (at least by the light of day) coexists quite peacefully with all the trappings of any quaint, historic European city-- quiet cobblestone streets, the occasional canal, friendly cyclists whizzing by, a plethora of cafes and charming restaurants, and dozens of lurid sex shops. Obviously.

The strangest thing to me, in keeping with this odd juxtaposition of scandalous and sedate, was the great diversity of the tourists wandering the streets. Even on the roads that were completely devoted to sex and drugs (including one shop that had about ten different varieties of marijuana seeds-- grow your own!), there were men and women of all ages. It was a far cry from the sad-looking middle aged men and disreputable UK college boys that I'd expected to be Amsterdam's exclusive clientele.

However, in the middle of the day I wasn't too concerned with my surroundings, approaching the whole idea of Amsterdam with the eyes of a curious traveller rather than a somewhat squeamish twenty-two-year-old with a tendency to avoid public displays of sexuality. I made my way through the narrow streets with no particular goal. On one pathway, I nearly tripped over a golden cobblestone that was raised from the others; on a second inspection, it was a small bronze statue of a single hand fondling a pair of breasts. No torso, just a disembodied chest rising out of the ground outside a mom-and-pop-looking pizza place. In any case, I suddenly found myself in Dam Square, which I guess is a hub for Amsterdamians. There was an obelisk and a piazza, a few churches and an official-looking government building, flying what I think is the unofficial amsterdam flag (see below). The myriad accordion players and organ grinders made me think I was in Paris for a moment.

It was here that I found three things: a good cup of coffee, a generous allotment of words to write, and the long-lost feeling of slow, exuberant joy that seeps into me whenever I am exploring a new place. Welcome back, my friend.
(Here are some pictures-- I don't have a camera cable with me, so I stole them from the internet)

Flag of Amsterdam
(I got this image from the Amsterdam Church of Christ website. I kid you not.) 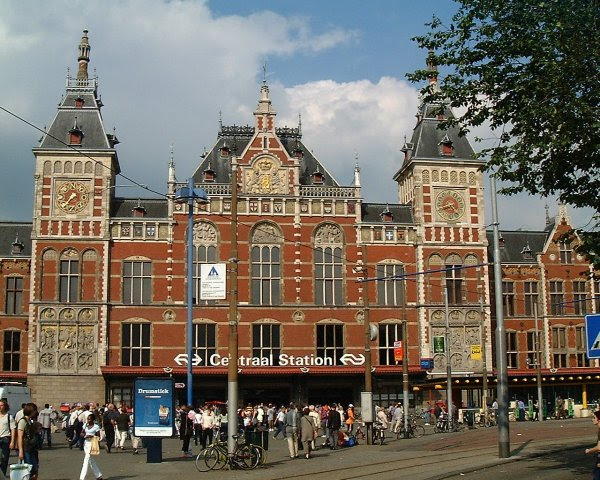