Days 3 and 4 of my trip to Morocco. This is not as interesting as the first bit since all we did was sleep and yell at people to retrieve lost luggage. Feel free to skip to the pictures at the end... I didn't take them, I found them on the internet.
----

Since we'd missed the air-conditioned, government-run bus from Essaouira to Marrakech, we crammed ourselves into the very last seats on a crowded, dirty, overheated bus to the country's biggest tourist destination. Like the bus to Essaouira, it made frequent stops to pick up and drop off, with children jumping on to sell chocolate or pastries and old women shambling up and down the aisles to beg for coins. The majority of the roads were dirt and gravel, so coarse that the bus was constantly shaking violently. It was impossible to sleep or write or even think, with the potent combination of the sweltering heat and the bumpy ride.

The bus station in Marrakech was outside the main city, it seemed... we walked for a long time trying to find an internet cafe to check the status of my bag, which had apparently arrived at the Marrakech airport that day. Upon happily finding out that it was to be delivered to my hotel laer, I immediately remembered an important detail... the address I had given for delivery in Marakech didn't know I was coming. I didn't even know if they had rooms available. At this point we were hurrying to get to the hotel before my bag, to avoid confusion... we walked all the way from the ville-nouvelle to the Djemma-el-Fna, the central square of the medina (a distance of about a mile). There we were confronted with the outrageous spectacle that is the essence and heart of Marrakech: snake charmers, monkeys on chains, backflipping acrobats, ragged beggars, strutting businessmen, grinning musicians, gaping tourists, hawkers, fakirs, magicians, characters all.

With Moroccans of all ages aggressively asking what we wanted-- from hotels to hash cakes-- we made our way to the Hotel Belleville. A hole-in-the-wall riad listed in the "budget" section of my Lonely Planet, I had given the address for my baggage claim because it was one of the only addresses I had on hand in Madrid. It wasn't clearly marked-- just a sign on the wall next to a wooden door in an alley I could nearly block off entirely if I spread my arms. We entered and, in broken French and English, tried to explain the bag situation. Eventually, we figured out that no, the bag hadn't been delivered; yes, there were rooms available for that night; and they would be more than happy to keep an eye out for it. Too tired to walk anymore, we trooped upstairs to a very small double; the bed took up most of the room. However, it had its own toilet and hot shower, which was incredibly welcome news to me as I'd been without truly clean clothes for three and a half days at this point. I jumped gratefully into the shower and (hopefully for the last time) borrowed some clothes from Ryan, since mine were filthy and sweaty almost beyond recognition. We ventured out to dinner at a place overlooking the Djmma-el-Fna, reputed to have good vegetarian couscous (as per Ryan's request, as it was his birthday). As a word of warning to future travelers... Morocco is not a great place to be a vegetarian. You pretty much eat couscous.

By 11:30pm, the bag still hadn't arrived--5 hours after it had supposedly landed in Marrakech, and 60 after it was supposed to have landed in Madrid. Annoyed and frustrated, I sent a nasty email and returned to the hotel for hopefully just one more night without clean clothes. So grateful were we for a real bed and a real bathroom that we slept in shamefully late... the hotel staff knocked tentatively at around eleven, informing us gently that they'd love to serve us breakfast but that we'd have to leave the room. We climbed sleepily to the top of the stairs to find a rooftop terrace shimmering in the hot midday sun. We sat at a table in the shade and were promptly served cafe au lait, fresh squeezed orange juice, and different sorts of bread and pastry with butter and a thin sweet spread. By the time we finished, it was after noon... and my bag had not arrived. The time had come for drastic action. We hailed a cab for the airport, marched inside and demanded to know where to find the lost luggage counter. After some confusing French exchanges, we managed to find a small office with two sleepy-looking officials, who unlocked another room. Just inside the door, sitting there innocently, as it had probably been sitting for days, was my green duffel. Feelings of annoyance and exasperation were overwhelmed by utter relief. Witthin five minutes, we were walking out of the airport with the bag.

After joyfully changing into my own clean clothes (rather than Ryan's athletic shorts and T-shirts), we took an afternoon siesta to avoid the worst of the day's heat, then ambled out again into the Djemma for a late lunch/early dinner. On our way, Ryan spotted an American-looking guy clad in a shirt and tie and laden with a duffel bag, strode up to him and said "You look familiar. Do you go to Princeton?" Completely taken aback, he stuttered "yeah . . . do you?" Turns out he was class of 2011, was in Tower with Ryan, and was a Woody Woo major studying in Rabat to improve his Arabic. Small world, hey?

Since it was nearly the end of our second day in Marrakech, and we'd done almost no sightseeing, a vague sense of guilt propelled us to try to find the medersa, or old theological university. However, doing so necessitated a dive into the souqs-- a labyrinth even more confusing than Essaouira's medina, with three times the hawkers. We didn't make it to the medersa until after it had long closed, and without Ryan's handy compass I don't think we would have made it back to the Djemma.

We took a light supper at the Marrakech branch of the Earth Cafe, where we got a call from Mustafa, who had made his way to Marrakech! A few minutes later, he strode into the cafe where we caught up a bit and took advice from him and another American traveler we met about the peak we were attempting to climb the next day (more on this later). Since we had to begin very early the following morning, we made our apologies and headed to bed, resting for the long day of hiking ahead. The Djemma at night, when it fills with dozens of food stalls and shops. Photo credit: http://www.vte.qc.ca/fr/destinations/photos/132_marrakech.jpg 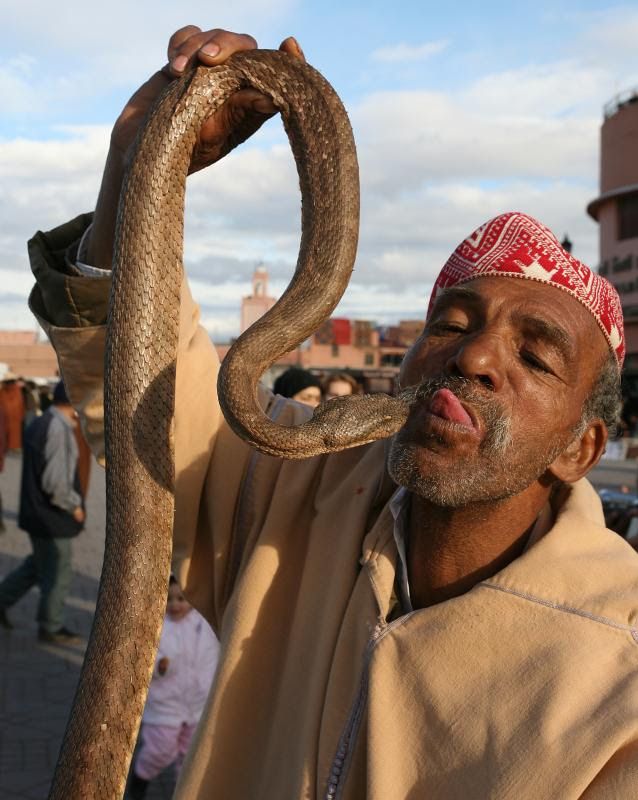 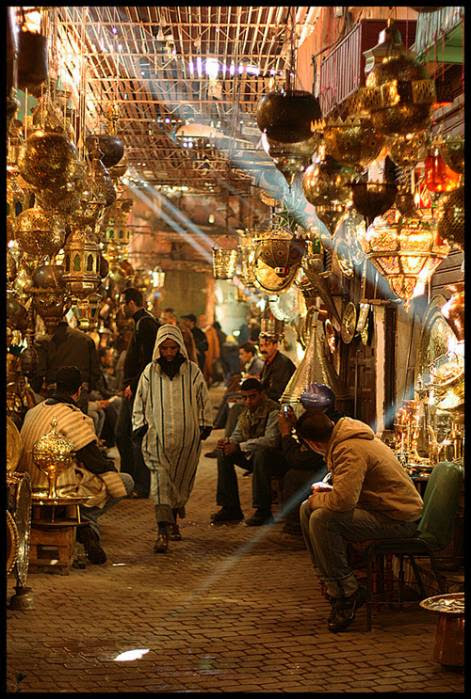