Today was our last day in Shell, but instead of visiting Casa de Fe or working at the construction site, we drove to a small town called Mera, about fifteen minutes away. In Mera, we worked at a church called Iglesia Bautista Cordero de Dios—it’s the home church of the Bartons and a few other missionary families, in addition to many Ecuadorians. Our main task was to repaint the dilapidated church building, although we also dug some drainage ditches around the foundation (I got to spend some time doing this with a dear old man introduced only as “Abuelo,” meaning grandfather…my Spanish has gotten better and better over the course of the week, so I was able to talk to him a bit). It also required a lot of preparation—cleaning the walls, stripping off old tape and glue from where they used to hang bible verses, and spot painting over discolorations that might have required a second coat. By the time we actually started painting, it was late morning. However, we went at it with a will—and the will of fourteen Princetonians is nothing to be scoffed at. By lunch, a large portion of the church had been painted.

Some of the ladies from the church cooked lunch for us—a delicious combination of vegetables, rice, and chicken. Someone commented on how good the chicken was, and one of the ladies commented that it had been alive a few hours ago. Fresh meat, indeed: when we went to dump our trash, we saw a large bucket of chicken parts and blood. I’m glad my research on meat production in was proven to be pretty much accurate! No sprawling factory farms here—just chickens in the backyard and cows on the farm.

After lunch, I left with Allie to teach music for the 4th-6th graders at the Nate Saint School. We didn’t find out that they wanted us to do this until our Tuesday evening meeting, and everyone just sort of assumed that I would do it. Which was fine, since I love music and I love to teach. But this sort of thing is much more up my older sister’s alley than mine—I can barely remember what I did in elementary school music class, much less come up with a 45 minute class that would actually be productive and educational for these kids. Moreover, how on earth could I teach them for 45 minutes without them getting bored and fidgety?

Most of my lesson was composed on the fly; we did some singing first, with songs that had fairly involved accompanying physical motions so that everyone was up and active. Then we played some rhythm games; I’m not entirely sure what I accomplished, but they were definitely clapping some complicated patterns in unison by the end of twenty minutes or so (except for two sulky boys who clearly did not want to be there). However, everything I had planned out lasted only about twenty-five minutes. On the fly, I improvised a lesson about rounds and canons—what they were, how they were important in music, even a brief mention of Pachelbel’s canon. We ended up learning two rounds and singing them together (thank you, Tom Chapin) until the end of the class.

After the lesson, Kim picked us up and ferried us back to Mera in the midst of a thunderous downpour. By this time (thankfully) they had finished the outside of the church, but the power had gone out so it was difficult to see where they had or hadn’t painted on the interior walls. But after a few more hours of hard labor, we proudly pulled back the dropcloths to reveal a church that looked brand new. The pastor and his wife, David and Carmen, were very thankful for our work.

Dinner, since it was our last in Shell, was at a beautiful restaurant called El Jardin—accessible only by a swinging bridge across a swollen, rushing river. Here we actually had multiple choices for our entrée, rather than simply being presented with food. At the encouragement of the Bartons, who come to this place for special occasions, I received and devoured one of the most delicious steak dinners I have had in my entire life. If I wasn’t convinced in , I am now— knows steak. Dinner was also a chance for us to debrief a little and share some of the highs and lows of the week, and to hang out with the Bartons one more time.

After dinner we went to a souvenir shop called Casa de la Balsa, which supposedly specialized in handicrafts made of balsa wood. To me, balsa means model airplanes, so naturally I was very excited. However, it turned out to be more of a tourist trap than anything else. Which was fine; I bought a few things, but I’m saving my big shopping spree for tomorrow’s excursion to . Satisfied with our purchases, we headed back to the Hosteria for one final devotional and sharing time before our last night together (we’re taking a red-eye back to the States). Tomorrow we finally get a chance to be tourists—, here we come! 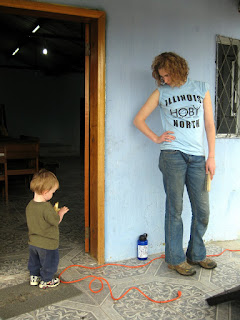 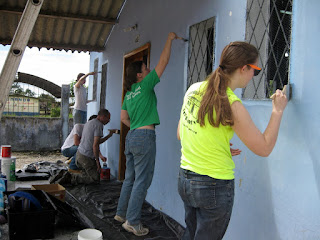 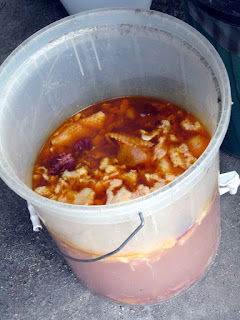 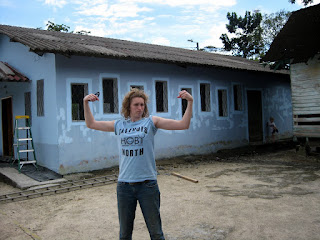 We WILL paint this church. 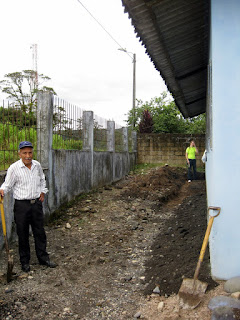 Abuelo and the ditch we dug together 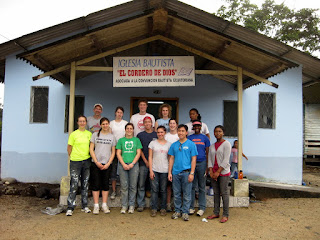 Standing in front of our handiwork! 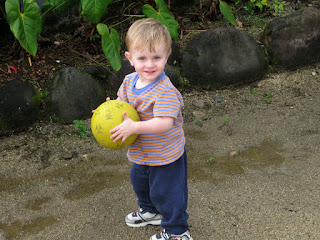 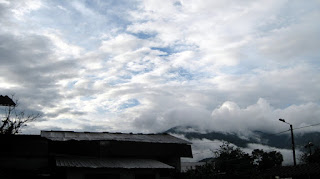 View from the church in Mera 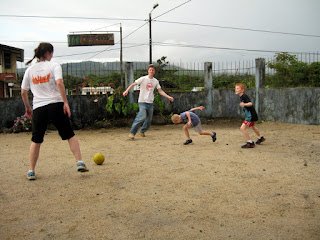 an impromptu soccer game with the Barton boys 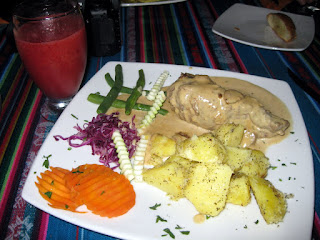