I am utterly exhausted as I write this, and my feet are screaming at me for the abuse I’ve given them over the past twelve hours. We began early, with a two-and-a-half hour rehearsal in the hostel lobby at 10am. I cringed every time the other hostel guests had to make their way around us as we crowded the atrium, singing obnoxiously, but we had apparently worked it out with the hostel beforehand.

From there we tramped en masse to the nearest Subte station, the Subway/Metro of Buenos Aires. It’s not like the Metro in Paris, or the Subway in New York, or even like the MTR of Hong Kong; the train lines radiate outward from Microcentro like oddly bent spokes on a wheel, and there are few transfer stations. However, with Sara’s guidance we successfully navigated the system and emerged in the barrio (neighborhood) of Congreso. We ate lunch at La Americana, the so-called reina, or queen, of empanadas—at least, that’s what the sign outside boasted. Empanadas are basically glorified Hot Pockets: little pastries full of meat, cheese, and vegetables. Three or four can make a meal, and they are a favorite lunch food or snack here in BA.

The empanadas at La Americana did not disappoint; they were delicious. They also gave us energy for our next adventure: wandering down Avenue Corrientes, a street famous for its bookstores and music shops. Although I speak no Spanish, I managed to find a few books and posters I understood. We boarded the Subte once more to see Plaza San Martin, a large grassy area with some trees, benches, and memorials, dominated by a colossal statue in the center. We only had two hours here so Becky and I just wandered up and down the surrounding streets, shopping lazily, gaping at the ubiquitous street tango couples, and perusing high-end shops full of things we couldn’t afford. My new favorite phrase is “Es muy Linda, pero yo soy estudiente pobre.” It’s very pretty, but I am a poor student.

We actually had empanadas again for dinner, since we were a little short on time and Argentine dinner takes FOREVER. We had to make it to the Subte once more to travel to a show: a local percussion group called La Bomba de Tiempo (The Time Bomb). Finally, I thought—a place to sit down! Little did I know . . .

We emerged from the humid, subterranean depths of the Subte, walked a few blocks, and blinked. The line for the show contained hundreds of people and was at least four blocks long. We followed the seemingly neverending queue, trying to join, until we were called to the front; apparently, Richard had secured 48 tickets in advance. Unfortunately, this led us past a crowd of justifiably annoyed Argentines, who were lined up to kingdom come to get into this show. They were all about our age, which should have been my first clue that this wasn’t the sort of concert I had pictured.

We filed into a narrow opening between buildings and suddenly found ourselves in a huge space, open to the sky and bordered by burned-out warehouses. It was decorated with neon signs, huge posters of odd-looking people, and a metal sculpture of a huge, menacing-looking insect. The space was dominated by a series of bright orange stage in the center, with many platforms and a screen at the back, decorated with round ship’s life-preservers. In the back corner, there was a bar that seemed carved into one of the warehouse fronts, selling empanadas (of course) and beer in 1L cups. The bar’s popularity mounted as the night went on.

Overall, the space had a very eclectic, Rastafarian feel; as one friend put it, if there were one place in the world where you could get pot, this would be it. This prediction soon proved true, as the space quickly filled with young Argentines and whatever the South American equivalent of hippie is. As night fell, the music got louder, the dancing got wilder, and the crowd got crazier. By the end of the night, everyone was jumping, screaming, and crowdsurfing to the heart-thumping groove of La Bomba de Tiempo, which was made up of about fifteen percussionists on various instruments and a pretty good scat singer. However, the music was not what made the experience. I don’t think I’ll ever forget it; dancing with reckless abandon in a crowd of young people that at that moment had no nationality, yelling and clapping and laughing with sheer joy. It was a very full sort of living, if that makes any sense.

Afterwards, the crowd-controllers and very present security guards opened the entire back wall—which turned out to be a chain-link fence—and at least a thousand people poured out into the street, most still drunk or high (or both) and all still laughing giddily and dancing to their own beats. Some had signs with arrows reading “Afterparty this way!” but we ended up taking the very last Subte train back to Microcentro and collapsed at the hostel, too tired to do anything but shower, play a few rounds of cards, and call it a night. 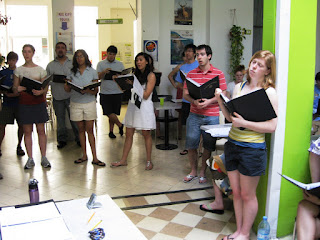 Rehearsal at the hostel 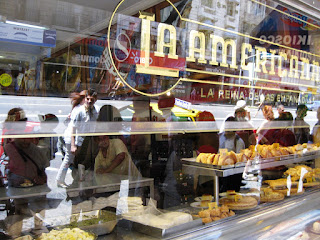 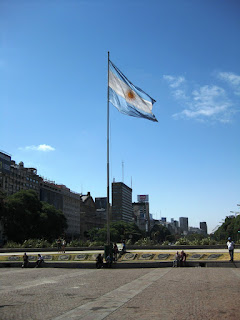 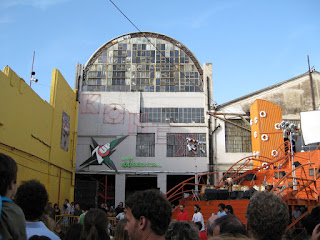