and I'm just a little stuck on you

Unfortunately, once more I overslept and woke up a mere 10min before the group was supposed to leave. I managed to drag myself out of bed, into some clean clothes, and onto the Subte to the bus station at Retiro. The early morning was gray and dreary, and the district from which we took the bus was the least well-kept I'd seen-- piles of trash everywhere, homeless people, ripped up sidewalks, and people handing out newspapers and flyers of every conceivable political bent. These obstacles not withstanding, we boarded the bus for San Antonio de Areco at about 9:30am.

San Antonio de Areco is known as the unofficial capital of the Pampas, the rural flatlands surrounding Buenos Aires. It's a very small town, known for its silverwork and gaucho history. The gauchos of South America are the equivalent of the cowboys of North America-- riding around on horses, driving cattle, facing off with outlaws, and taming the wild west.

We went to a couple of museums in town, including the workshop of a famous silversmith, which was pretty cool. We also got to see a gaucho museum, which was pretty much a ranch with displays you could walk through. The entire town was very pleasant, with a firm feeling of "wide-open spaces." I wish I had brought my swimsuit, so that I could join the locals jumping of the bridge and swimming in the river to take a break from the heat.

Other than the two museums, almost everything was closed. Apparently the whole sleepy little town takes a lunch break from 12:30-3:30pm every day; this was, sadly, almost exactly the time slot that we were there, so all we could really do was amble aimlessly through the streets or along the river. Which really wasn't too bad, anyway.

The bust left at about 3:30 for the 112 km trip back to Buenos Aires, just as it began to rain. The fates were smiling on us though, because the rain stopped as soon as the bus pulled into the terminal at Retiro, held off during our walk to the Subte and home again, and restarted as soon as we reached the door of our hostel. After a few hours at the hostel to relax, shower, and pack, we piled into groups of four and took cabs (costing only about 5 pesos each, less than $2) to the restaurant where we were to have our final group dinner.

The last group dinner was quite an affair-- everyone dressed up in their fines (or, for some, their least wrinkled) apparel. The meal itself had three courses: an appetizer of breaded mozzarella and bruschetta, a main course of either spinach ravioli or beef tenderloin in a Malbec (type of Argentinian red wine) sauce, and for dessert, helado (ice cream) with strawberry sauce in a pastry shell. Everything was delicious and beautifully presented, and I must admit . . . I abandoned my vegetarianism for one night only and ate steak for the first time in two years (n.b. if you would like to engage me in conversation over why I felt that this was a morally justifiable choice, I would be happy to oblige. also, it was absolutely, fantastically delicious.)

Each table was kept well stocked with soda, water, and good red wine, so when Richard stood up between the main course and dessert, we were all prepared for his lengthy toast and presentation of gifts to Maya, Sara, Victor, and Carolina (tour manager, vice president, president, and assistant director, respectively, with the latter three also serving as much-utilised translators). Happy, content, and full of good food, we were more than willing to oblige the restaurant staff and proceeded to serenade them with one last performance of a few of the songs we'd gotten to know so well over the last month. One of the waiters then informed us that he'd taken a video of the whole thing, and that he would post it on the restaurant's facebook page as soon as he could.

After a sudden surge of hugging and picture taking, the whole group headed out to a bar in the trendy, touristy Plaza Serrano area and had one last night out, laughing and dancing and yelling together. It was the most unified I had ever seen the Glee club; indeed, probably the most unified I'd ever seen a group of close to fifty people. I think every single person knew every other one, and could sit down and talk to new friends just as easily as old ones. It was a pretty incredible feeling.

We couldn't keep everyone together for long, though-- some went to another club, some back to the hostel, and others just to wander wherever the wind blew. Those who were in reasonably good shape took care of those who . . . weren't . . . and eventually ended up back at the hostel for one last night with the heat and the mosquitoes.

The final day of the trip got off to a slow start as people packed their suitcases and moved them into the hostel's luggage room, then gradually drifted off to the separate adventures they had planned for the day. Mine was brunch at Cafe Tortoni, a famous cafe where legendary Argentinian poet Jorge Luis Borges had sat composing his great works. We also stopped by an antique bookstore before heading off to another Feria, this time in La Recoleta. The fair was much more upscale than its San Telmo equivalent, in price, quality, and size. It had a much more diverse selection of goods, and we spent hours browsing and drinking fresh-squeezed orange juice until it was time to go back to the hostel to leave.

As we packed our things into the bus to the airport, I looked around once more at the bustling city. Although it's not one of my all-time favorite places, I did enjoy my time there, mostly because of the people I spent it with. I think the most important lesson I will take from this trip is that friends can be found in the most unexpected places, and treasures can emerge from the most unexpected people. I'll miss these new friends this coming semester, but I can also take that lesson and apply it when I arrive in Australia in just a few days. I'm excited! 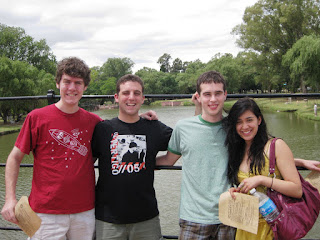 On the bridge in San Antonio de Areco 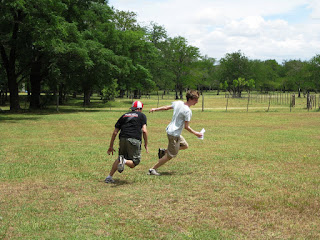 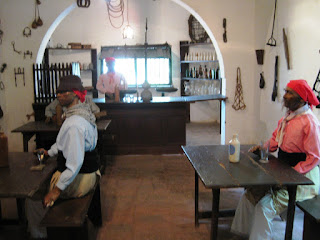 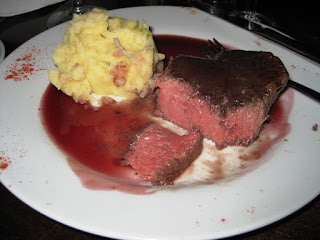 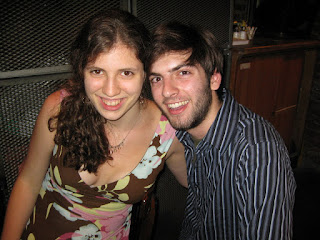 Me and my friend Brad on the final night 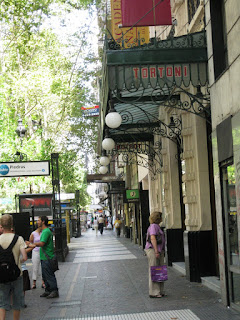 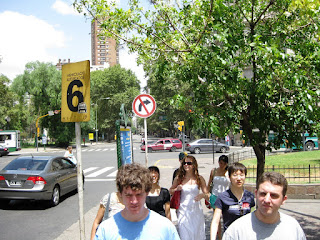 On the way to the Feria at Recoleta 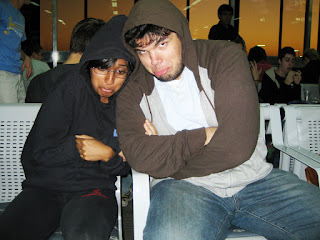 Sad to leave Buenos Aires :(
Posted by Margaret at 3:29 AM