(Note: the following entries on my recent trip to Argentina are excerpted from the journal I kept while staying there)

Arriving here in Buenos Aires was a full day affair-- we left Princeton at 3:30pm on Friday and got to Argentina at 2:40pm the next day (by way of Newark and Toronto, a total of about 15 hours of flight). After clearing the near-nonexistent customs, all 48 of us piled onto a bus and left for our hostel in the city. The 80-90 degree heat hit as soon as we walked out of the airport, and the sunlight streaming through the windows of the bus had an unavoidably soporific effect. One moment, the road before us unfurled through green fields and distant foothills; a quick doze, and the city's skyscrapers had replaced the pleasant meadows. Although it wasn't the towering, undeniably cosmopolitan skyline of New York, there was a certain charm to the buildings we approached, an old-world sort of feel.

My first impression of the capital of Argentina was that of a lively, bustling city with a very European flavor. If I had to describe it in terms of previous experiences, I'd say it was a cross between NYC and Bangalore-- crowded streets, a mixture of small shops and skyscrapers, but without the traffic, piles of trash, and wandering livestock I'd grown accustomed to last summer. Our hostel, the 06 Central Hostel in Microcentro (the neighborhood at the city's center), is a pleasant, airy place, with double doors and high-ceilinged rooms. Although unairconditioned, parts of the roof are open to the sky and fans keep the air reasonably cool. The shower and bathroom facilities are adequate, but not palatial-- and certainly welcome after our long flight. The rooms are dorm-style with 6 people to a room, but large enough not to be uncomfortably crowded. The hostel also has a kitchen, an open, cheery lobby, and a TV room with two computers with internet (there's wifi in the whole place, too).

After cleaning up a bit, we hit up an ATM and explored the neighborhood of Microcentro. The long, pedestrian avenue Florida was full of street vendors selling jewelry, leather, and other tourist trinkets. Musicians and street performers abound: singers, guitarists, dancers, jugglers, and even people whose sole purpose is to dress like a statue, stand completely still, and startle passersby. I wonder if there's a name for people like that. At about 7pm, the entire group headed out to a small restaurant that Richard and Carolina had found, where the food was mediocre but the atmosphere pleasant and friendly. Of course, only gringos eat so early, but that's exactly what we are so why pretend otherwise?

After dinner, we split into smaller groups: some went back to the hostel to relax, others meandered off to find a sports bar to watch the big soccer match set to begin at 10. A small group (myself included) decided to further explore Microcentro. We saw some small monuments, a little park, and the obelisk at the center of Avenue 9 de Julio, which the internet tells me is 140m wide and in fact the widest street in the world. Exhausted from all the walking, we stopped to grab drinks at a little cafe a few blocks from the hostel and then headed to bed to prepare for the next long day! 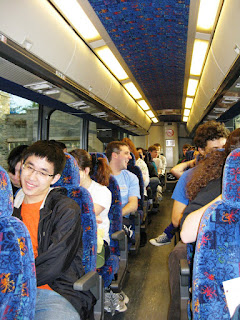 On the bus to the airport! 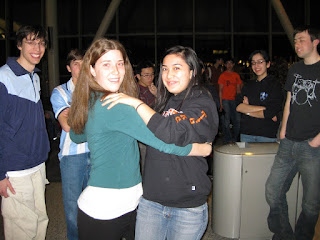 Tango lessons in the Toronto airport 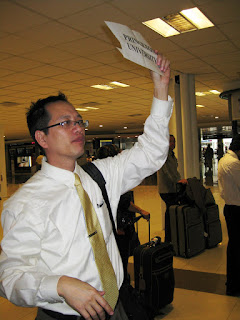 Richard, the director of the Glee Club, waves a sign at us to get us to organize. We mostly fail to comply. 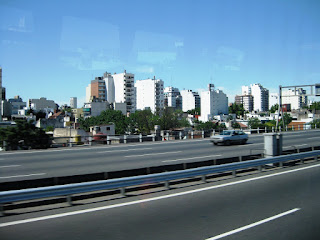 My first view of Buenos Aires 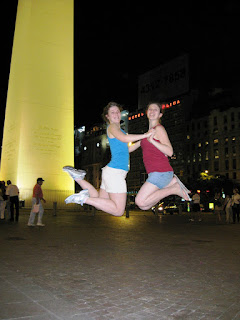 Jumping in front of the obelisk in Av 9 de Julio