I couldn’t bring myself to write last night, as I was pretty miserable and in a lot of pain. Turns out that two hundred bug bites below your waist, although it’s kind of funny, actually messes you up pretty badly; my legs were swollen to about one and a half times their normal size and I’ve barely been able to walk for the past few days. I’m still in pretty bad shape but I’ve got to write all this down or I’ll forget everything.

Construction day 2 was easier than the first one—it was a bit cooler, and the work was not as back-breaking. In the morning, we rode to Casa De Fe in the official orphanage vehicle (a truck with a tarp over the top) to pick up several small wooden chairs and desks that needed to be painted and lacquered in bright primary colors. While , Herman, and Luis led the boys in glorious power-tool projects, the girls painted and chatted in the bodega (what they call the tool shed, which has a substantial patio area). After lunch, I went with a few other students to help teach P.E. at Casa de Fe (or rather at the big arena a few blocks away). Dwight was the one actually leading, but he says it’s very helpful to have “big kids” there so that the kids can have an example of listening and following instructions. So we played tag and kickball with the bigger kids, and simple cooperation games like Red Light Green Light and a variant of Sharks and Minnows with the kindergarteners. It was easy to really get involved and enthusiastic about the games, almost like being a kid again, and it was even more rewarding when you could see the kids becoming more engaged and active because of your participation.

After the last class of P.E., we returned to Casa de Fe to tutor some of the older kids in spelling, reading, and their times tables. However, before too long it was time to head back to the Hosteria for a quick shower before our tour of MAF—the Mission Aviation Fellowship. This was one of the parts of the trip I was most excited about . . . how cool would it be to be a missionary pilot! MAF (also known as Alas de Secorro, meaning Wings of Help) flies to remote airstrips in the middle of the jungle to pick up medical emergency cases. They serve the Quechua, the Shuar, the Ashuar, and the Waodani tribes. MAF also flies missionary teams to the jungle at discounted rates, which is how they fund their medical airlifts. We got a tour of the airplane hangar and training room, plus a rundown of how the organization worked. Unfortunately, it takes 7-10 years to become a pilot for MAF—and, due to interference from the Ecuadorian government, they are no longer allowed to hire pilots from outside the country. We also got a tour of the Nate Saint house—where one of the famed five martyred missionaries had lived and hosted numerous ministries.

Tonight’s dinner was at Casa de Barton—the home of Kim and Paul Barton, the doctors who have organized and planned our whole week. We had a traditional Ecuadorian dish called “vocaterra,” which is apparently Spanish for “dump truck.” It’s a mix of plantain chips, sweet tomato/onion/cilantro salsa, beans, tuna, and toasted corn, in whatever proportions you want. To that, Kim added some take-out empanadas and delicious fruit salad. Other dinner guests included the Umbles, another missionary family that lives next door to the Bartons. Both the Umbles and Bartons shared their testimonies with us, including an account of Paul’s recent trip to for emergency medical relief there.

After an extended stay at the Barton Home, we retired to the Hosteria for the night. I had been volunteered to teach Art at Nate Saint and Casa De Fe, much to my dismay—my grumbled protests that I would accidentally glue the kids together were laughed off. However unqualified I felt, it turns out that you don’t have to be that artistic to teach kids how to make masks out of paper plates. In fact, my engineering skills soon became useful, and the other two team members that were helping soon regarded me as a wizard with pipe cleaners and popsicle sticks. We taught at Nate Saint, then got lost walking to Casa de Fe. After wandering around Shell for about forty minutes, we finally found some landmarks and collapsed, delirious, at the orphanage with only a few minutes to spare.

It was here that I had what I think was my most rewarding experience of the week thus far. While we were teaching the 1st-3rd grade children Art at Casa de Fe, the teacher from the neighboring class (4th-6th grade) came over looking distressed. She informed us that one of her kids was having trouble with math, was crying, and would not be consoled, so would one of us like to come over and try to help? Always eager for the chance to abandon Art for Math, I volunteered. The child in question turned out to be a girl named Talia, whose story we had heard a few days ago from Patti Sue. At about twelve, Talia is one of the oldest girls at Casa de Fe; she’s there with her sisters Abigail and Alondra. All three of them were sexually abused at home before being placed in the care of the orphanage; they were returned home after testifying against their attacker at trial. However, the abuse continued. Talia took her two younger sisters and ran away to Casa de Fe and Patti Sue, pleading with her to take care of them. Her story almost broke my heart, and meeting the three of them in person was a privilege. According to Patti Sue, Talia is among the most difficult children at the orphanage, simply because she can’t accept the idea that people might love her.

So when Talia was in tears over her 6 and 7 times tables, I ached for her. We worked together to learn, and after ten minutes or so, she was multiplying like a pro—and, more importantly, was smiling and laughing and happy. Those ten minutes were worth the long flight, the bug bites, the sore shoulders, and more.

The afternoon was spent lacquering the chairs and desks that we had painted the preceding day—all in the shelter of the bodega, since it was pouring all afternoon. Despite the rain, a few of us took some time to climb the nearby water tower for one last view of the jungle surrounding Shell. High above the canopy, soaking wet and covered with mud, I felt like the king of the world as I surveyed the misted mountains, dense jungle, and the seemingly tiny piece of civilization that is Shell.

After a shower at the Hosteria, the Bartons announced that they wanted to give us a taste of the “real” jungle. So we headed just outside town to the Ecoparque, which is a sort of nature sanctuary. We saw plenty of wildlife, but it wasn’t confined at all—the Ecoparque was literally a path through the jungle. Our guide pointed out leafcutter aunts, several species of monkey, land tortoises, a small rodent similar to an agouti, a rainbow boa constrictor, small alligators called caimans, and coolest of all—a young ocelot (a member of the big cat family that is reminiscent of a jaguar). We ate dinner at the Ecoparque and heard the testimonies of several other doctors at the Hospital Vozandes. Along with all the other missionary stories we’ve heard this week, they were extremely powerful testaments to the omnipresence of God and our attempts to follow His call and His plan for our lives. While walking back to the cars, the majesty, brilliance, and utter clarity of the heavens took my breath away—truly I serve an awesome God! 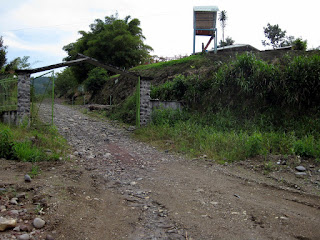 Entrance to the CdF construction site... a.k.a. JURASSIC PARK 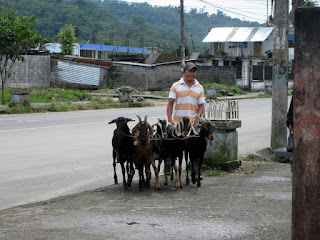 a man selling goats' milk in the streets 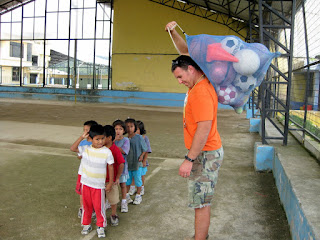 Teaching P.E. to the kindergarteners at CdF 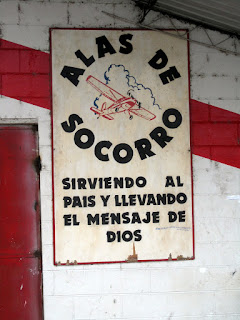 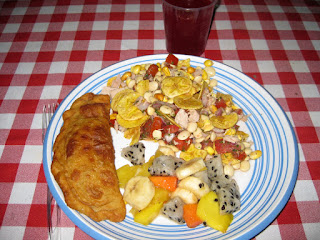 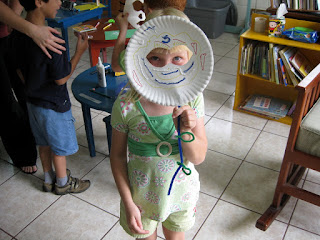 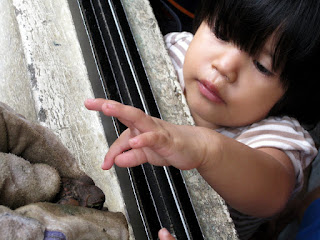 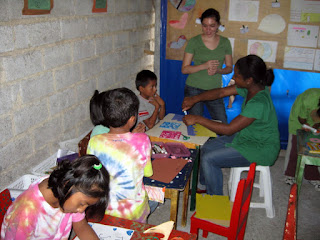 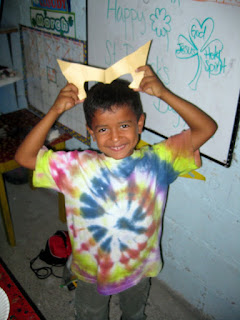 Javier and his bat ears 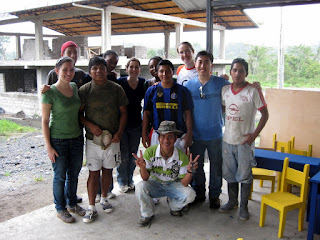 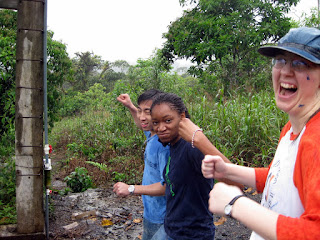 WE WILL TAKE ON THE MOUNTAIN 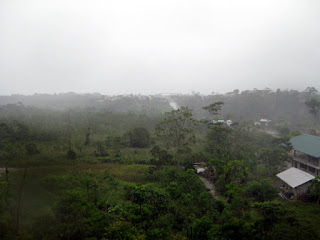 View from the water tower at the construction site 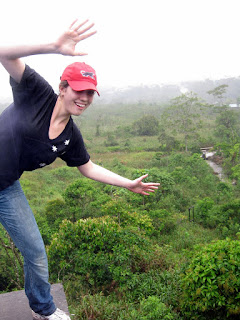 soaking wet and about to fall off? 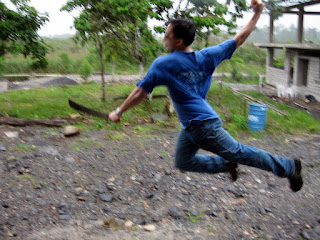 ALEX HWANG IS A NINJA 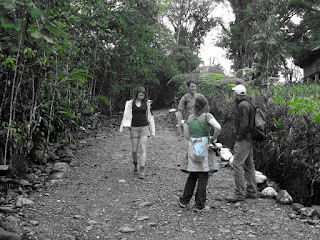 About to enter the Ecoparque 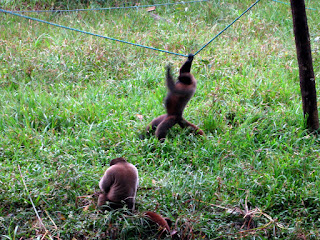 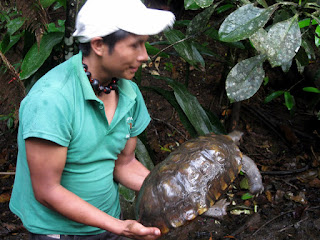 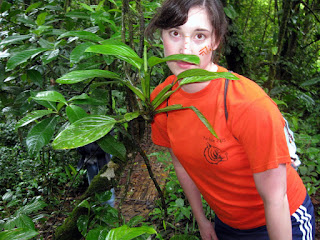 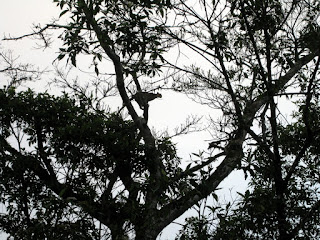 Diego the ocelot (center, in the tree)
Posted by Margaret at 12:30 AM