The last few moments of our trip are finally upon us. I’m in about to board a plane for and then a van to , left alone with my thoughts and reflections on a whirlwind week.

Yesterday was a travel day—we packed up and left the Hosteria at 8:30am yesterday and drove for six hours before we reached . The views were, again, absolutely breathtaking— is a stunningly beautiful country, and it has demonstrated it over and over for the past week. We got to stop in a town called Baños, where we took pictures at an amazing overlook bridge (complete with sketchy-looking bungee jump operations) and chewed on sugarcane and some kind of Ecuadorian toffee. When we reached , we headed to its actual namesake: the Equator (the 00°00’00” line lends its name not only to , which means “Equator” in Spanish, but to the city of , which means “Middle-of-the-Earth” in Quechua). We went first to a museum that doubles as both a cultural center and a collection of hands-on science experiments about the properties of the Ecuator. Our next stop was a large monument called Mitad del Mundo—which actually, when calculated with modern GPS, isn’t directly on the Equator. It was a huge tourist trap, but the shopping was quite good—I wish we’d had more time there.

Dinner was with both the Barton and the Skillen families at a cheap, greasy, delicious restaurant called La Tortilla, specializing in empanadas, tamales, and of course tortillas. Before we left for the airport, we got to see the headquarters of HCJB. This organization started as an international Christian radio station in the early 20th century, and has spread to sponsor a number of missionary activities. In a vacant conference room, we listened to Kevin Skillen speak about his job at the State department. It sounds like an amazing job—he travels to a new country every few years, knows several languages, and manages to be a good husband and father to his three small children. However, it wasn’t too long before we were packing back onto the bus and off to the airport for our red-eye back to the States.

It’s very difficult for me to summarize or consolidate what I learned over this week. I worked hard physically and spiritually, despite major obstacles in both those areas. We frequently discussed the topic of God’s calling for one’s life: how to discern it, how to be open to it, how it might be unexpected. To be honest, I think I came out of it more muddled than ever. However, I still remember what Tandy said to us earlier this week (roughly paraphrased):

“You can agonize endlessly over all the seemingly major decisions of your life: where to go to school, where to get a job, where to live. But the reality is—God doesn’t care. God equips you perfectly for the job he’s set for you to do, and He’ll guide you to it no matter what you decide along the way.”

I still don’t know where God is calling me to spend the rest of my life. Maybe it will be a long time before I do. But in the meantime, I’ll try not to let my own vision of my life distract me from His. 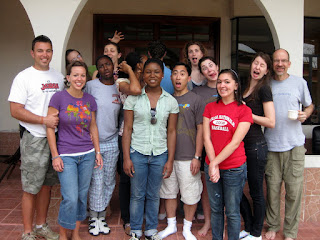 This pretty much describes our team. 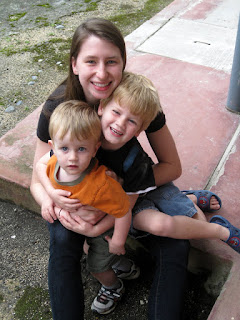 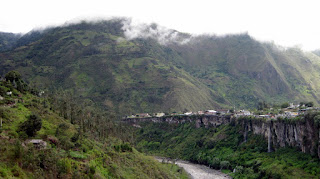 View from the bridge in Baños 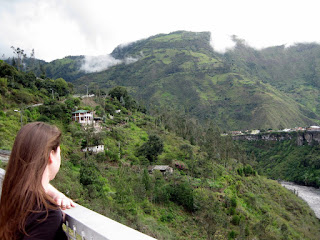 Katie on the overlook 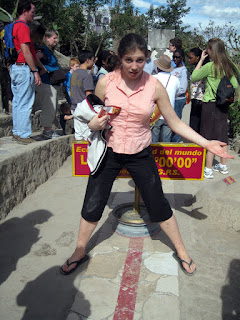 WHICH HEMISPHERE AM I IN?? 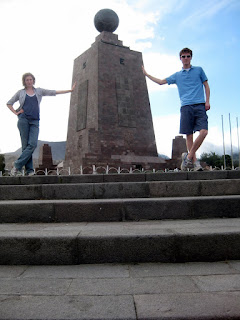 This monument is actually about ten stories tall 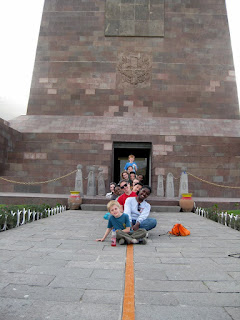 Our team on the equator! 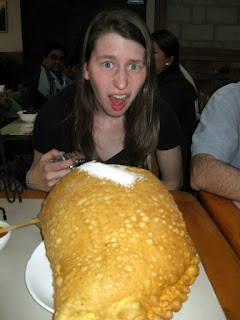 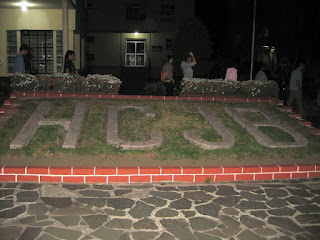 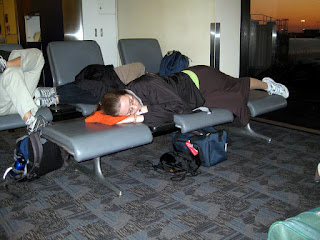 After a long and exhausting trip!
Posted by Margaret at 8:40 PM