It sounds trite, but it's true-- all good things must come to an end. It's been a fantastic trip to an incredible country, but I think I'm ready to resume life as usual in Australia. Which is good, considering that I have class in about 5 hours.

Our last few days in NZ were full of surprises. After the highway-collapsing debacle, we ran into even more trouble when we arrived in Punakaiki. Our hostel was pretty small, and owned/run by one German dude named Lutz who was fairly uptight. He was already upset that we arrived late due to the weather and road conditions, so we humbly checked in at 10pm and he shut the door behind us and closed reception for the night. However, when we opened the door to our 6-bed room, we found that 4 of the beds were already taken. Except, there were three of us. Uh oh. We asked around, and each of the four residents swore that they were supposed to be there (although we couldn't be sure, as none spoke English very well). Steve eventually solved the dilemma by very graciously volunteering to sleep in the lounge on the couch. I may have mentioned that Steve is a top-notch, high-quality individual. Props to Steve.

Bed troubles aside, Punakaiki was a great stop on our trip. It's very isolated and remote-- there's no petrol station, supermarket, or really anything there. There was no light pollution whatsoever, and the rain had finally slacked off a bit, so the stars were completely unobscured. I don't think I've ever seen so many stars. Imagine a clear night, with plenty of bright white stars, and then fill in the spaces with slightly fainter stars. Then keep filling in the spaces with fainter and fainter stars until, when you squint, the sky looks almost like it's been whitewashed. That's how many stars there were.

We were awakened by Lutz at 7am, as he roared into our room like a tornado of hellish German fury. Apparently he had discovered Steve on the couch, who had then told him the situation, so Lutz was determined to find the freeloader. He woke everyone up and eventually found the culprit: a youngish Dutch guy with a particularly vacant expression. The guy had apparently just stayed an extra night without paying, although we had confronted him the preceding night about whether or not he was supposed to be there. Anyway, Lutz was furious and almost marched him upstairs to confront Steve and reimburse him. It was great fun; I wasn't even grumpy at being woken early.

Now that we were all well and truly awake, we decided to go for a walk on the beach, which was literally right on the doorstep of the hostel. The morning light coming in from over the mountains was really beautiful, and the constant mist made everything seem ethereal and sort of surreal. It was a pretty beach, but not really one I'd want to swim on. For breakfast, we bought some homemade muffins from Lutz . . . some sort of wholemeal chocolate bran concoction, which was delicious. Lutz apologized for the confusion and gave Steve most of his money back, and we checked out. It was a lovely hostel, really.

On our way out of town, we stopped to see the main attraction of Punakaiki: the famous "pancake rocks," layered limestone rock formations just offshore. Bridges ran out onto the 20- tall rock towers, and you could watch the surf rage through the channels it had cut into them. Apparently, limestone isn't naturally formed in layers like that, and scientists don't know exactly why the rocks at Punakaiki look like-- well, pancakes.

We struck out for Christchurch over the same narrow, winding roads we'd experienced throughout NZ. However, as we crossed over the northern part of the island, driving east, the landscape began to change once more. The mountain passes were interspersed with pastures-- full of sheep, of course-- and decently long straightaways, sprinkled with many more small towns and signs of civilization than we'd been seeing on the West Coast. Unfortunately, this led to our second nasty surprise. On a fairly deserted, 5km long stretch of straight highway, we're cruising along at a fairly normal pace, blasting some Red Hot Chili Peppers through Carol's stereo, when suddenly lights start flashing . . . we were, in fact, getting pulled over by a kiwi cop. Steve had been doing 123 in a 100km zone, roughly the numerical/mental equivalent of going 75 in a 65 zone. Everyone does it, especially on a long straight road where you can see for a long way in both directions. It's not reckless, it's not unsafe. But nevertheless, Steve got socked with a NZ$170 fine. As the cop said, "it's just too fast, eh bro?"

Thoroughly chastised, we continued driving to Christchurch. We made a brief stop at Hanmer Springs, a famous hot springs area north of Christchurch. However, we decided actually getting in the hot springs wasn't worth it and after looking around a bit, continued on our way. We reached Christchurch at about 6pm, checked into our hostel, and because it was our last night all together, went out for dinner to a nice sushi place. Heather then led us on a single-minded and determined hunt for an asian grocery store that carried a particular kind of japanese ice-cream dessert that she insisted was absolutely delicious . . . she was right. and, despite asking at least three Japanese people, we STILL do not know what it is called. It was ice cream wrapped in some kind of gummy coating . . . anyone?

We finished off the night by going out to an Irish pub recommended by the hostel staff, and had a blast with just the three of us walking around Christchurch at night. It was midnight by the time we got back to the hostel, just as the people our own age were starting to come out-- then came nasty surprise #3. Once again, there were only two beds left in our large 12-bed dorm-style room. No one answered the bell at the hostel desk; no one was there to help us. Once again, I got the best side of the deal as Steve and Heather agreed to share (have I mentioned that I really love these guys? you are the best). As we got ready for bed . . . you guessed it, nasty surprise #4. Heather rechecked her plane ticket and found out that her plane was in fact leaving at 6am, not 8:15am. Which meant we had to be at the airport in about 4 hours. Wonderful.

The next morning (only a few hours later) Steve and I drove Heather to the airport, since she had a review session Monday morning that she couldn't miss and thus needed to be back Sunday. Steve and I, however, had one more day in New Zealand . . . so of course we spend the first several hours sleeping. Once we had recovered from our 4am run to the airport, we walked around the city a little and saw some things, including my favorite place in Christchurch-- the Arts Centre. There was a bustling outdoor crafts market of interesting and unusual items; all were far above a student budget, of course, but beautiful to look at. There was also an interesting, interactive exhibit on Ernest Rutherford, who was apparently from New Zealand! go figure.

In the afternoon, we drove to Akaroa, a about an hour away. The beautiful harbor was nestled between huge volcanic mountains, all as green as we had come to expect from this amazing country. We arrived just in time to catch the late-afternoon sun glinting off of tranquil waters, with hundreds of sailboats silhouetted against the horizon. Even though we stayed in town just long enough for a cup of coffee on the waterfront, it was absolutely worth the two-hour round trip.

We got back to Christchurch with just enough daylight left to stop by the grocery store, trying to figure out how to tie our various remaining food supply into something that resembled dinner, ending up with some kind of stir-fry/curry/rice/noodle something-or-other. We spent one last night out on the terrace, in heated discussion with two gay guys from Brisbane about American politics, healthcare, and television. Being American while abroad is a very interesting experience. People generally tend either to attack your country, or make excuses for it (like they feel bad for you, or something). Neither of these types of people usually see America in a positive light. The choice it presents is interesting: either sweep it under the rug and agree with them, trying to minimize conversation about it, or stand up for your country's economic, political, and social model. I typically do a mix of both: I admit America's flaws, but I won't be railroaded into downsizing my opinions.

Since we had another early morning ahead, we said good night early, packed our things, and went to sleep (now that we had enough beds). 3:30am saw us on our way to the airport to return the rental car and check in for our 6:15 flight back to Melbourne, where we met up with several other American friends who'd been in NZ that week; they hadn't even bothered to book a hostel that night, but opted to sleep in the airport instead. By 8am we had touched down in Melbourne, and by 9am I was in my first lecture of the day.

All in all, it was a fantastic trip, and I'm very glad I went. I had a ton of fun, got some great photos, made some wonderful memories and some lifelong friends. I don't know what my next destination will be (Australia is a big place!) but you can be sure I'll write about it when I find the time! 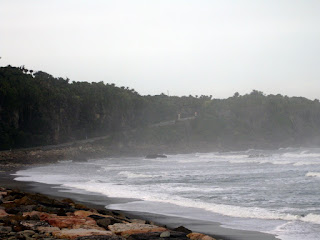 Our backyard at the Beach Hostel 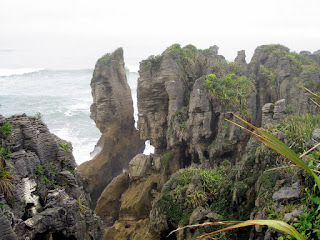 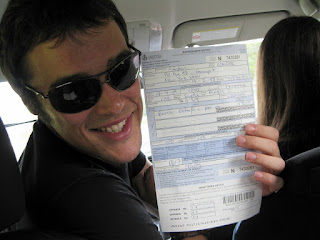 Steve and his speeding ticket 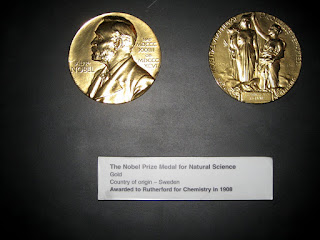 Rutherford's Nobel in chemistry-- pretty sure it's a replica, but still! 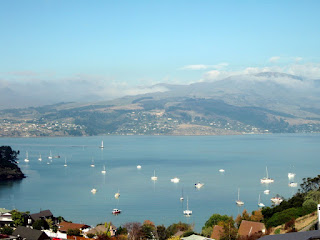 Lyttleton harbor, on the way to Akaroa 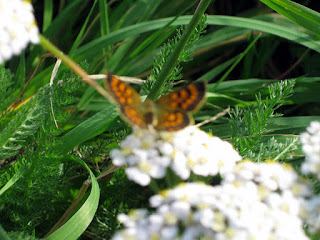 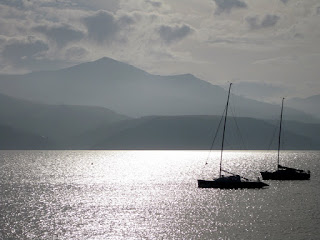 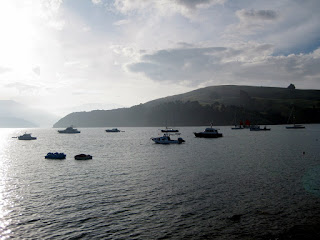 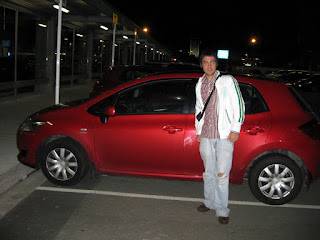 saying goodbye to Carol :(
Posted by Margaret at 4:11 AM