race around the world . . . or just melbourne

As promised, here are some pictures from the "Race Around the World" (modeled after the show "The Amazing Race"), held on the last morning of O-week. The TCAC split all the freshers that wanted to participate into teams of ten or so, and assigned two seniors to each group as leaders. More senior volunteers were stationed around the city, where we completed different tasks and were then given a clue to lead us to the next task's location, collecting objects and completing mini-tasks along the way. Although the event was primarily for freshers, I feel like the senior leaders had just as much fun as we did-- running around the city obtaining an eclectic collection of strange objects, taking photos of ourselves doing crazy things, and completing the tasks at each of seven stations. Highlights were:

TASKS
-In Chinatown: finding someone who spoke Mandarin and asking them how to say a list of ten words, many of which were slightly awkward to have to describe to a non-English-speaker...
-Outside the library-- crawling up a long set of steps on hands and knees, only to be asked at the very top how many steps there were (good thing someone counted the first time around, because most groups had to do it twice or even three times!)
-Outside Crown Casino-- do the Fresher dance while wearing each other's clothing. Bonus points for wearing each other's clothes.
-Outside the Town Hall-- Collecting signatures for a petition for higher salaries for bank CEOs.
-On Lygon Street-- eating a plate full of cold spaghetti, baked beans, and a ring of pineapple, as fast as you could with no hands
--In Federation Square--Drawing portraits of strangers and getting as much for them as possible; this ranged from money (tops was about $4) to bits of rubbish to articles of clothing to what I got . . . he actually pulled a phone out of his pocket, took out the sim card, and gave it to me (!).

ITEMS (worth varying amounts of points)
-A rose for each TCAC member (awww)
-A receipt from a bikini wax
-A bag of sand
-A fairy
-A triple pounder from Mackers (=McDonalds). They don't actually sell these because the fat content is too high, so we had to buy three "pounders" and stacked together a total of twelve quarter-pound patties.
-A chip from Crown Casino
-An ATM receipt stamped at exactly 10:54am


PHOTOS (worth varying amounts of points)
-A "moment of passion"--we staged a dramatic death scene
-Group shot on the roof of any building in the CBD (downtown)
-Human pyramid to stop a tram
-Group shot in Young & Jackson's (a classy downtown pub) drinking out of anything but cups, mugs, or glasses. We used ice-cream cones :)
-Flailing around on the ground in the lobby of Crown Casino
-Helping an old lady cross the street
-Riding an animal
-A group member in confession
-Group member wrapped in toilet paper on the steps of Flinders Street Station
-A male group member unhooking a bra one-handed
-Helping a car parallel-park
-Something "barely legal"

There was also a list of Trinity trivia to fill out, including the date of the dean's birthday and a stirring rendition of the College Song.

There were at least a hundred more things to do and get, but that's all I can remember. However, I was our group's official photographer, so I have almost all of the pictures from our trip. Here are a few; enjoy! I'll post more legitimate stuff when I find time to write, perhaps this weekend. 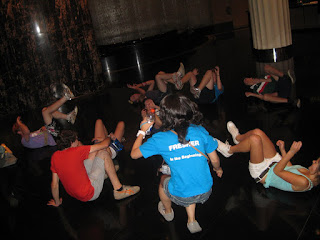 In the lobby of Crown Casino . . . classy 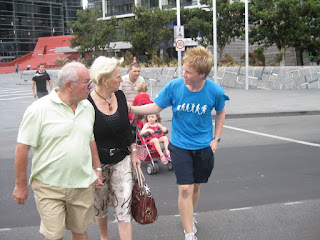 Helping an old lady cross the street . . . unfortunately, she figured out that the item on the list specified "old" and got offended 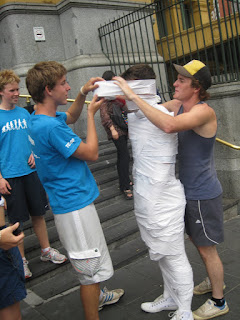 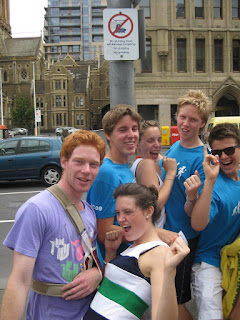 Something "barely legal"... note the anti-rollerblading sign in the background that says "no grinding." Ha. 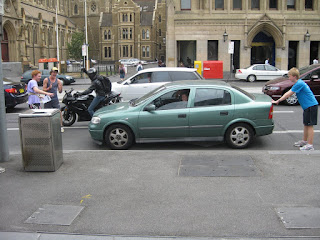 Helping a stranger parallel park. They were actually just stopped at a red light, but the TCAC doesn't know that ;) 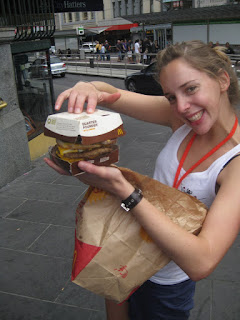 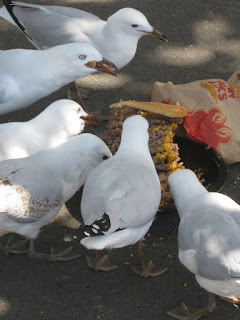 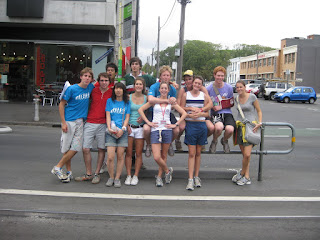 Group photo at the tram stop
Posted by Margaret at 2:41 AM